Aquabooth has designed to work in 140 cm - 160 cm deepness water. The product has been produced with fiberglass. The device is waterproof and strong enough to stabilize itself inside the waves.

Aquabooth is the special product of Hisseli Harikalar Company. After the first prototype was produced, I have joined the company and we started to develop the second version of it. We designed and produced a version that was an end-user product.

Aquabooth is working with the GoPro cameras. It is written as "GoPro 3 & 4 Supported" image below but after we were developed a new wifi communication system, the system is working with all GoPro models. ( GoPro 7 Black has been tested.) 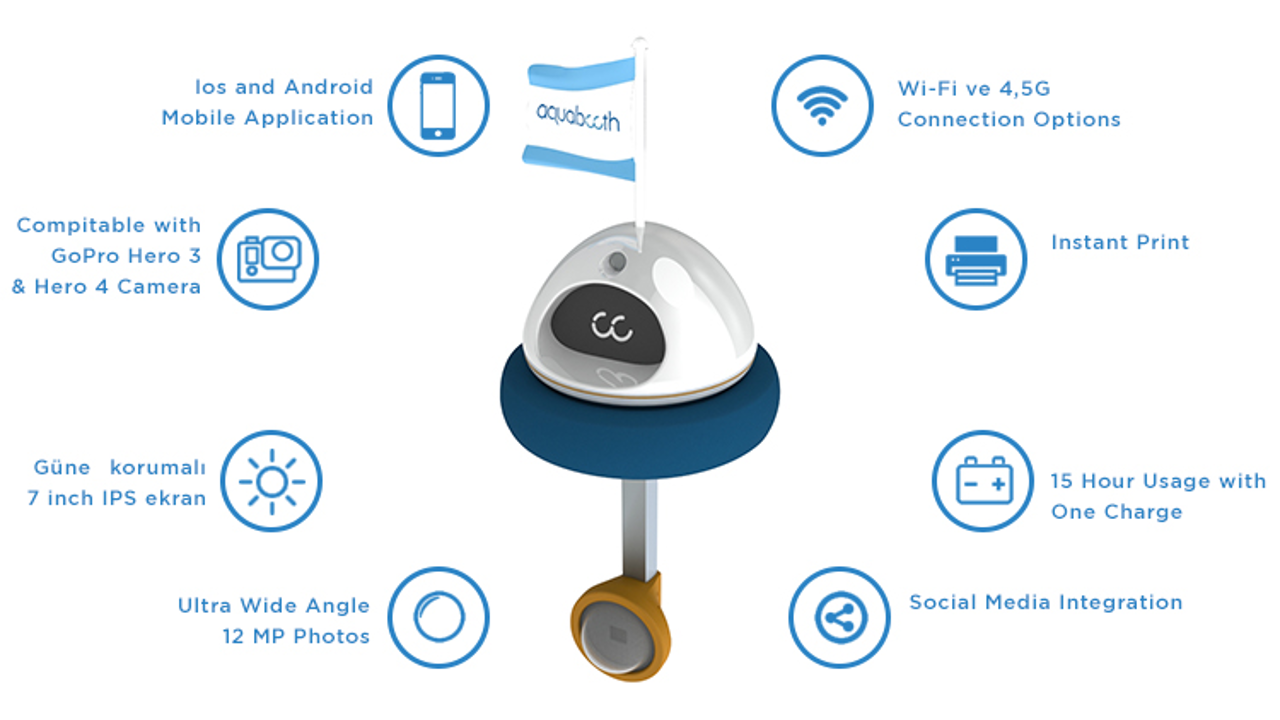 There is a 4.5G modem inside the device. Internet connection is activated by putting a SIM kart in it. If Aquabooth has an internet connection, uploads the photos taken immediately to cloud storage. Now the system is using a Dropbox account. Also, the system works with an FTP connection. This information is about the connections that could be entered on UI easily.

Thanks to the USB port on the Aquabooth back-side module, you can connect a keyboard and mouse to make changes in settings. 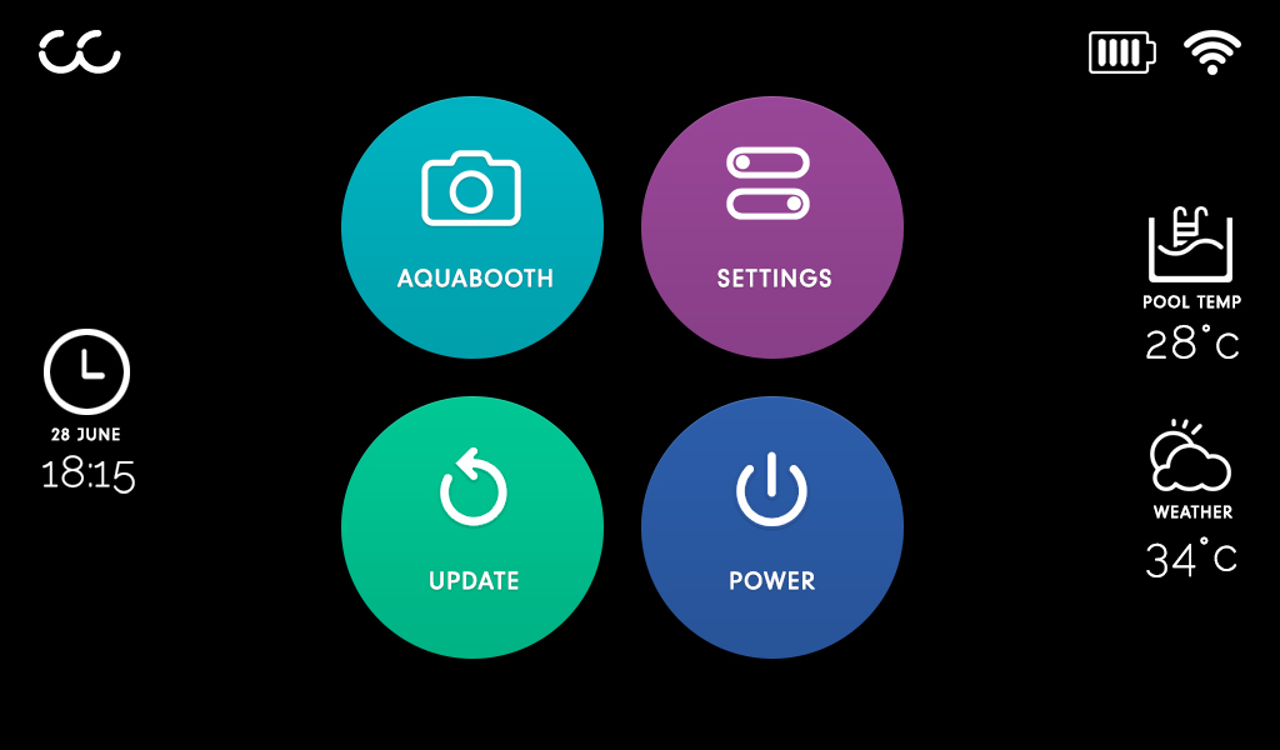 The device has 15 hours of battery life on one charge. It can take photos and upload them to cloud storage all day long. The charging time is 8 hours. It is suitable for daily usage. Besides, we have planned a solar panel to charge the system while working inside the water.

The IPS TFT display was specially chosen for working under sunlight.Riverdi Yüksek Ansulmen Ekran Because the common 7" displays have low brightness values. Generally, standard displays' surface luminance is 250 - 300 cd/m2 but our display has 1000 cd/m2 surface luminance value which is much more than iPhone or other smartphones' displays. As a result of these brightness values, even under sunlight, GUI is easily seen by the users. UI design also planned with the black background because the display consumes much electricity to provide this high surface luminance so we decrease the consumption with our UI design.

The Aquabooth shows the photo that has been taken on the screen for 5 seconds. The user can decide the photo is good or to take a new better one. 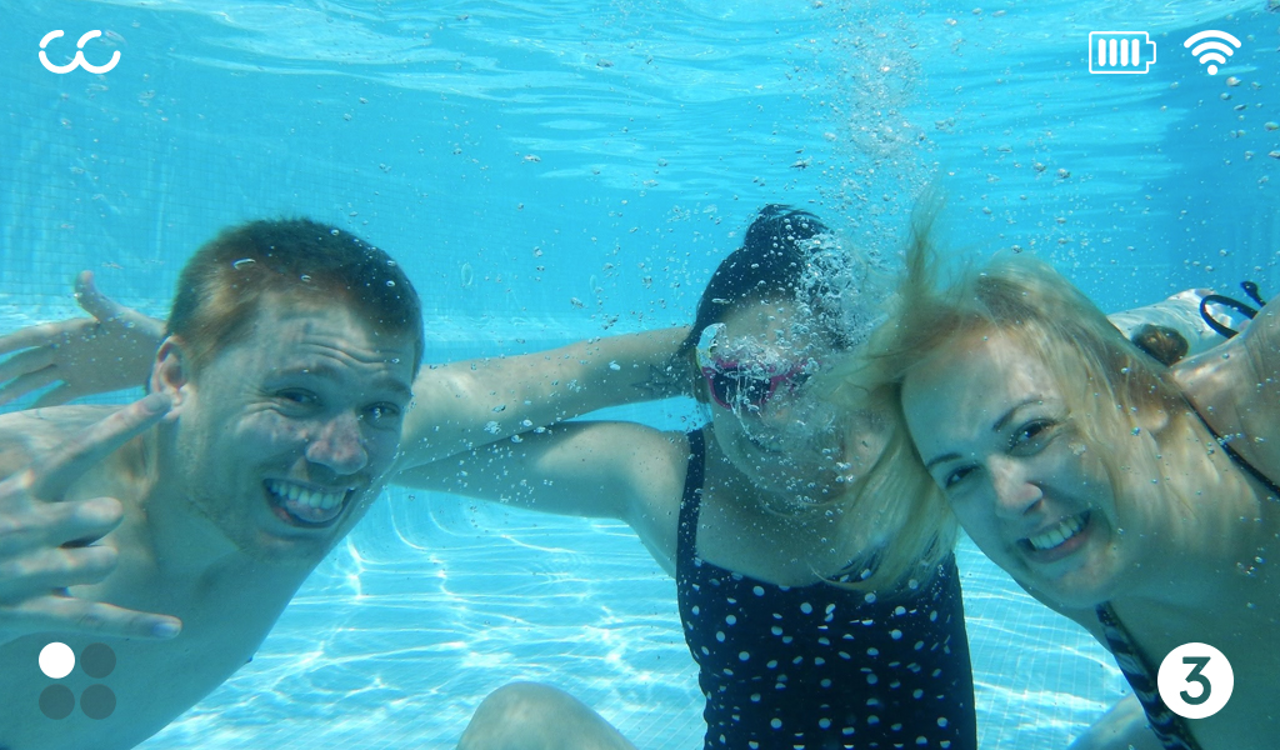 While the Aquabooth is in the water, there is only one button that you can interact with, and that is the snapshot button. This button, which is not only waterproof, has a motionless mechanism to withstand millions of presses. Piezo, capacitive buttons are used here. 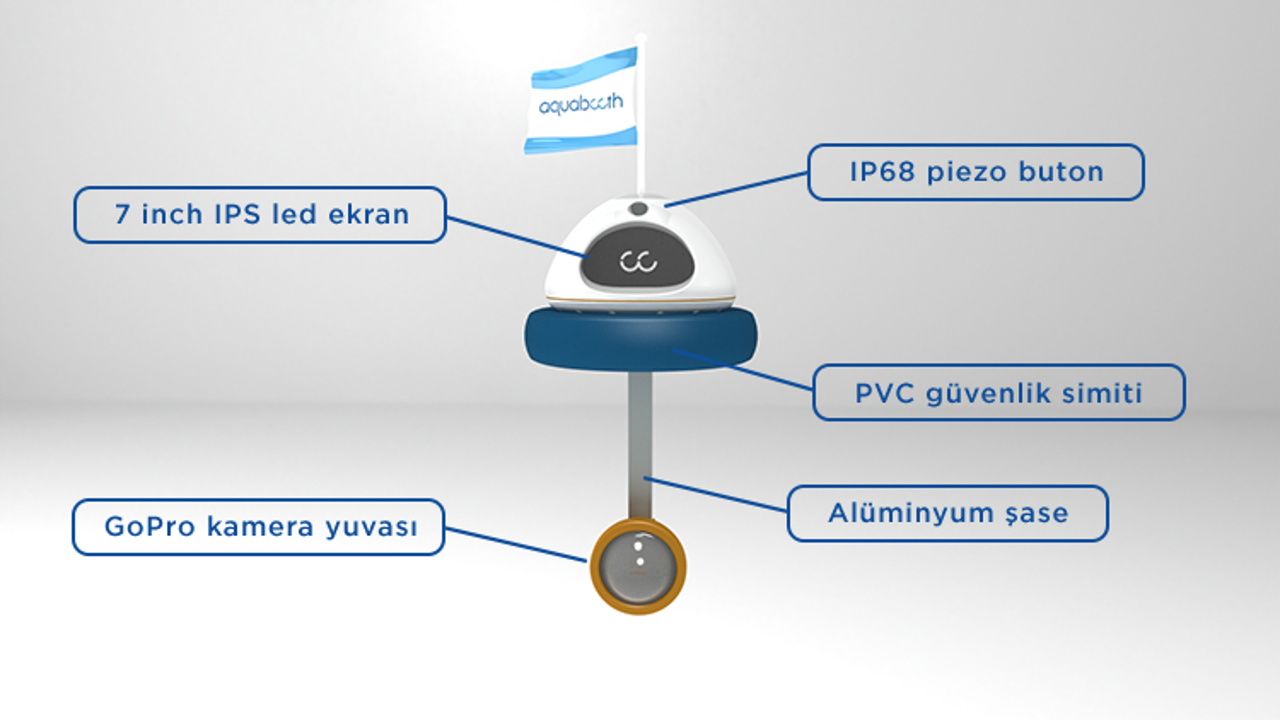 It is a modular device whose parts can be easily removed and installed. It is screw-mounted and engineered to work in water. It's design has been taken care of to appeal to the end-user. It has been downsized and lightened in order to be easy to adopt and use in the event industry. 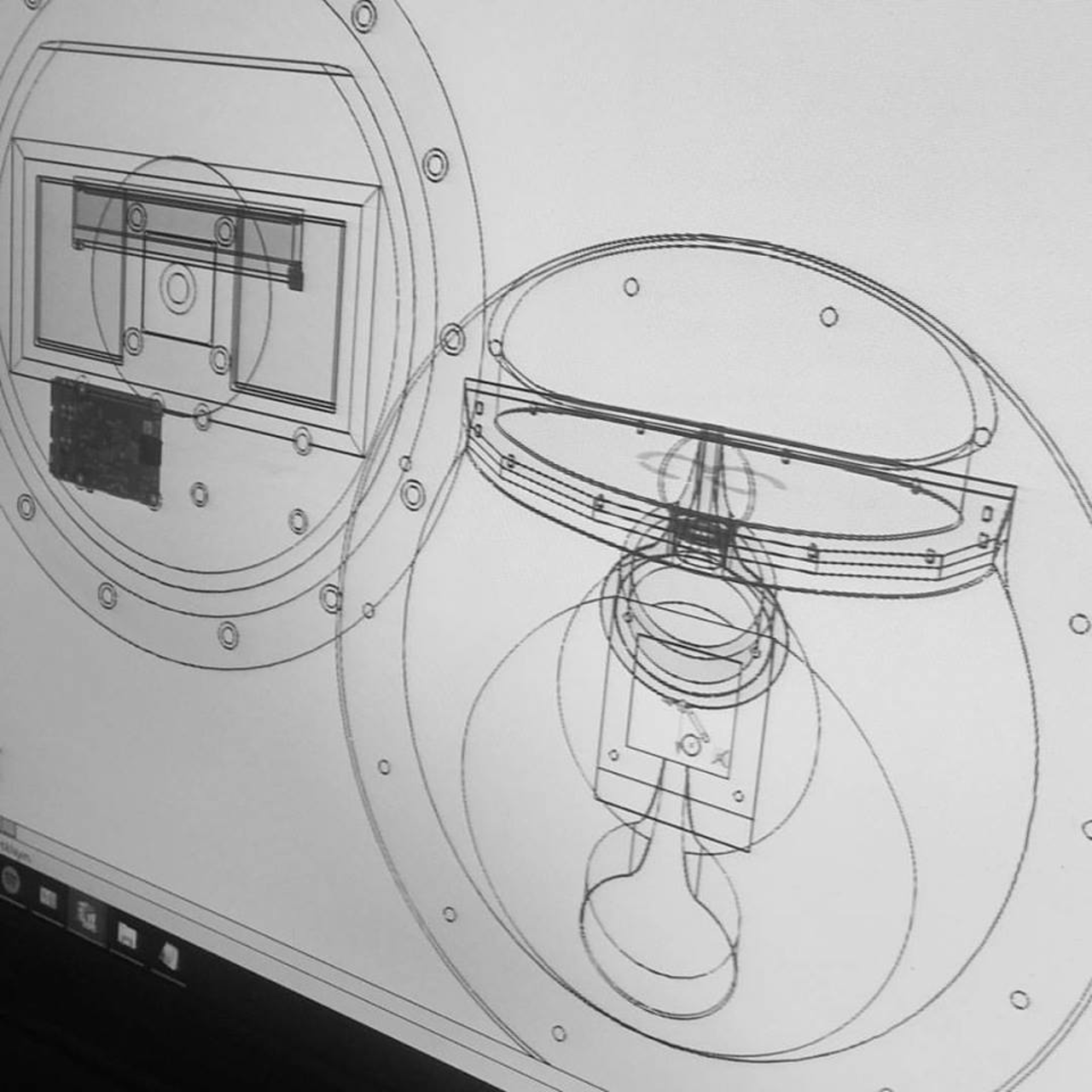 3D technical drawings of the new version were made by me and I personally took care of its production. Aquabooth, which is formed by the combination of many different components, comes into operation simply by combining a waterproof camera case under the water and the main part on top with an aluminum chassis. 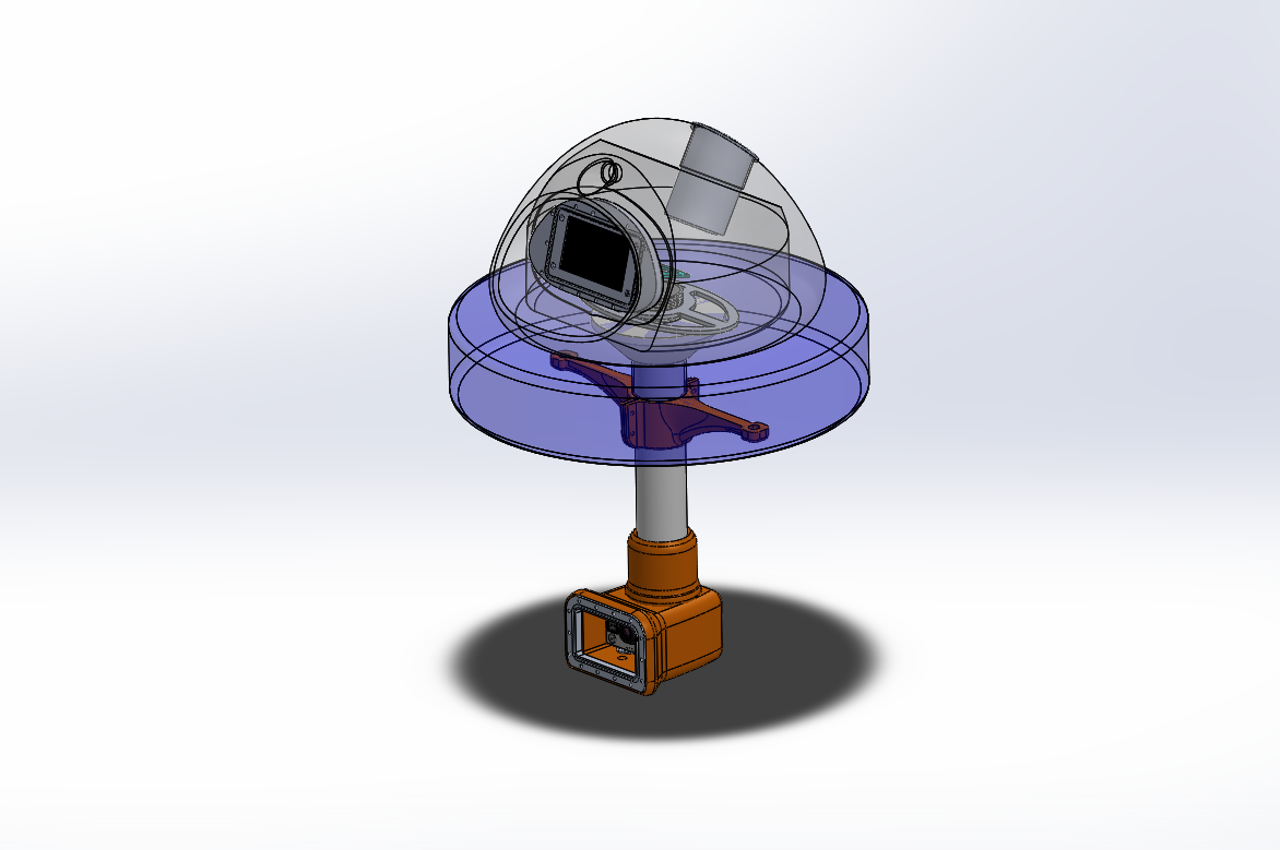 Aquabooth, whose head is designed as modular, can be easily disassembled and transported for charging. 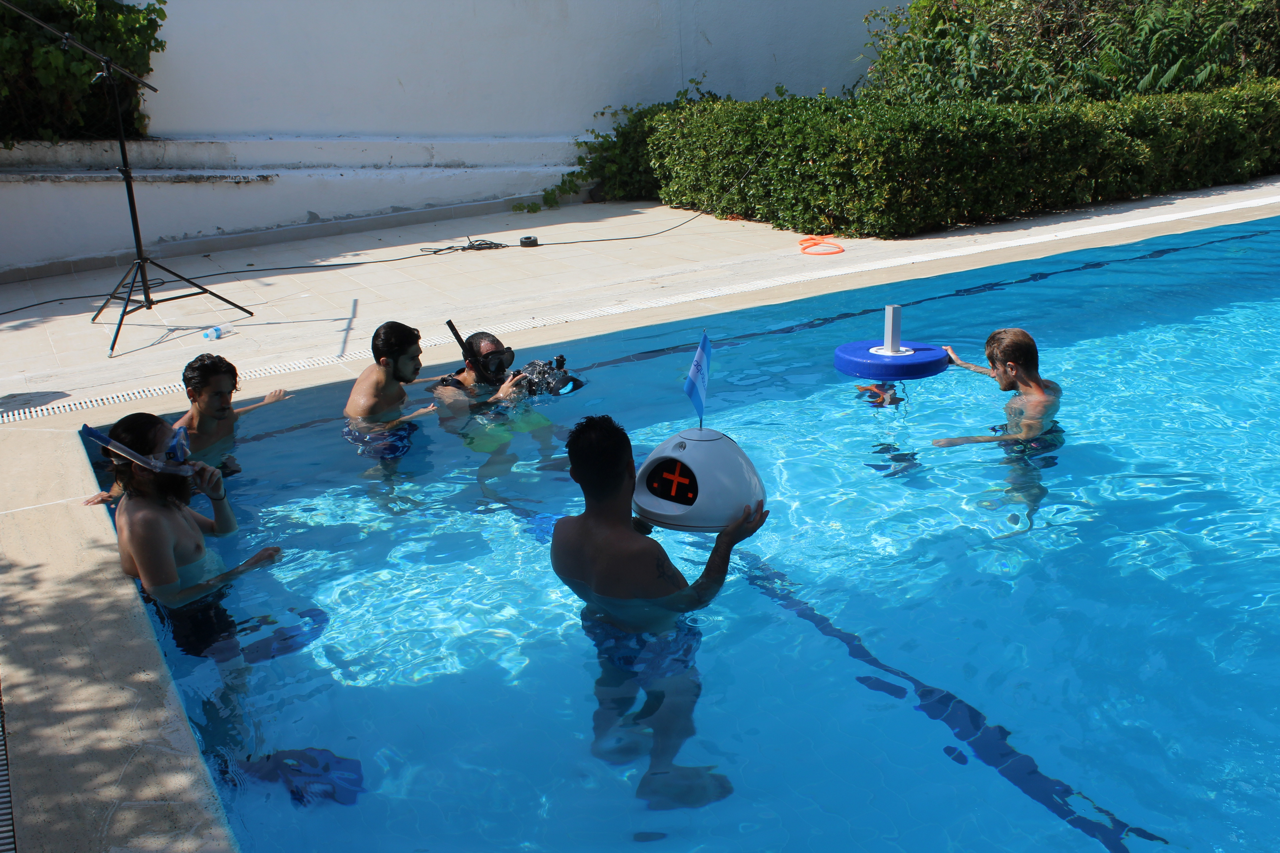 The first productions were made with a 3D printer and a mold was created. 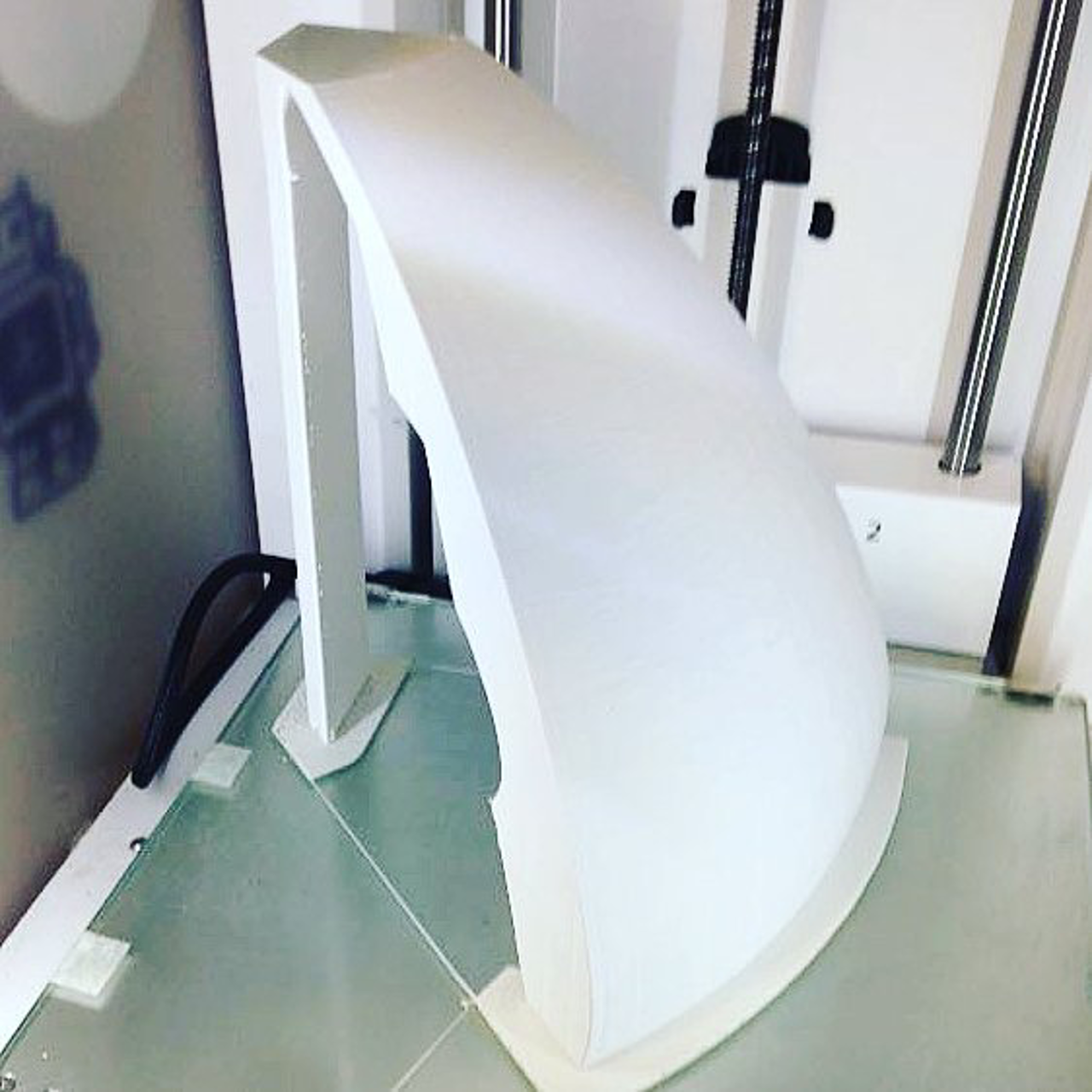 Aquabooth corporate logo and interface designs were made by [Volkan Ekşi] (http://www.volkaneksi.com/). It has a successful design language and has an eye-catching interface.

Aquabooth's interface designs are very energetic. It is designed with the assumption that it can be used as an end-user product. It performs operations by talking to you in a way that it is perceived as a personal robot. 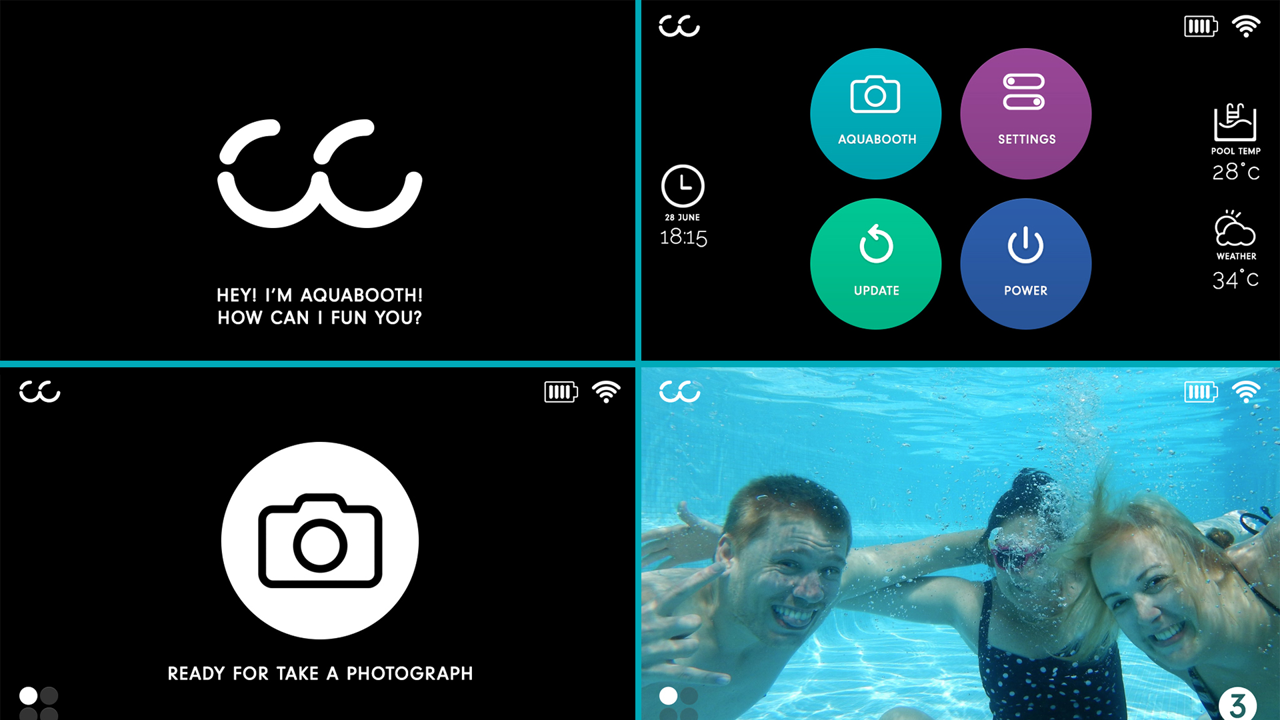 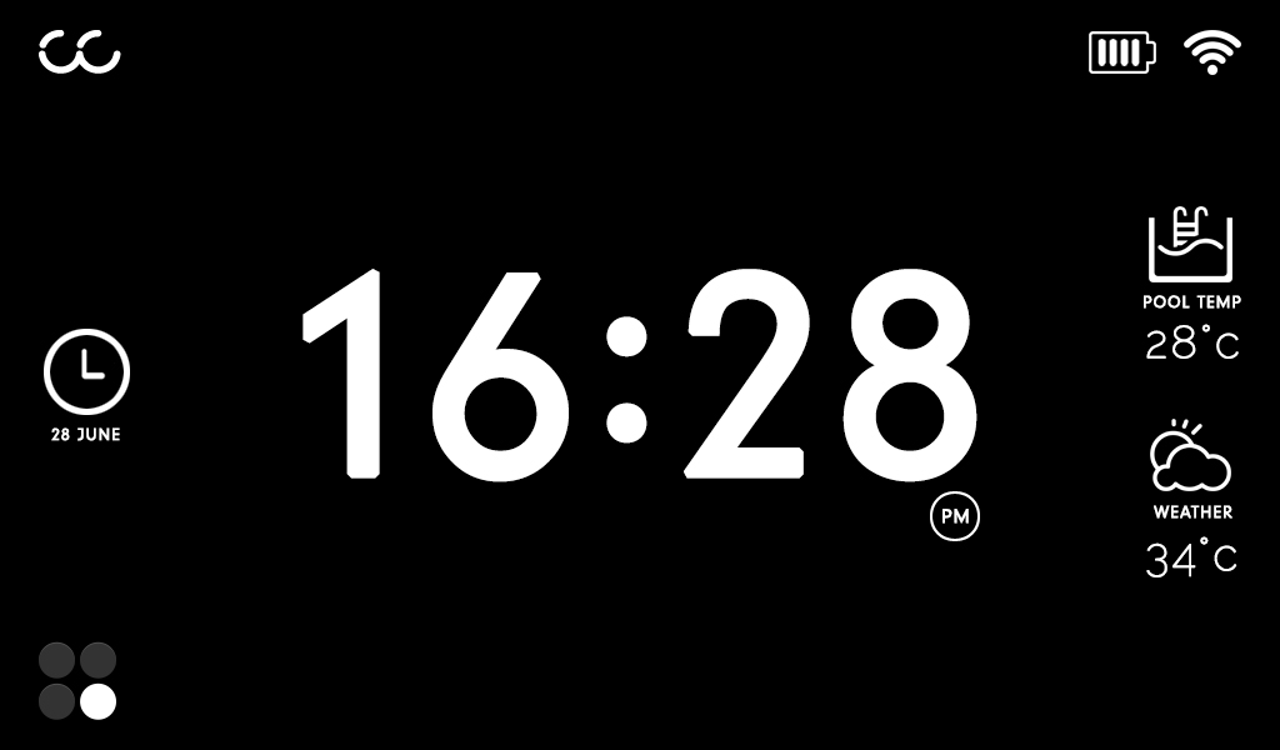 I had prepared the interface software to support multiple languages. In the first place, we released it in Turkish and English. It is possible to switch between these two languages ​​from the menu. In addition, the language options are prepared as XML files so that the infrastructure can be updated quickly. Once translated and uploaded to the system, it can be easily translated into different languages.

The electronic circuit has been completely prepared by me using Altium Designer. 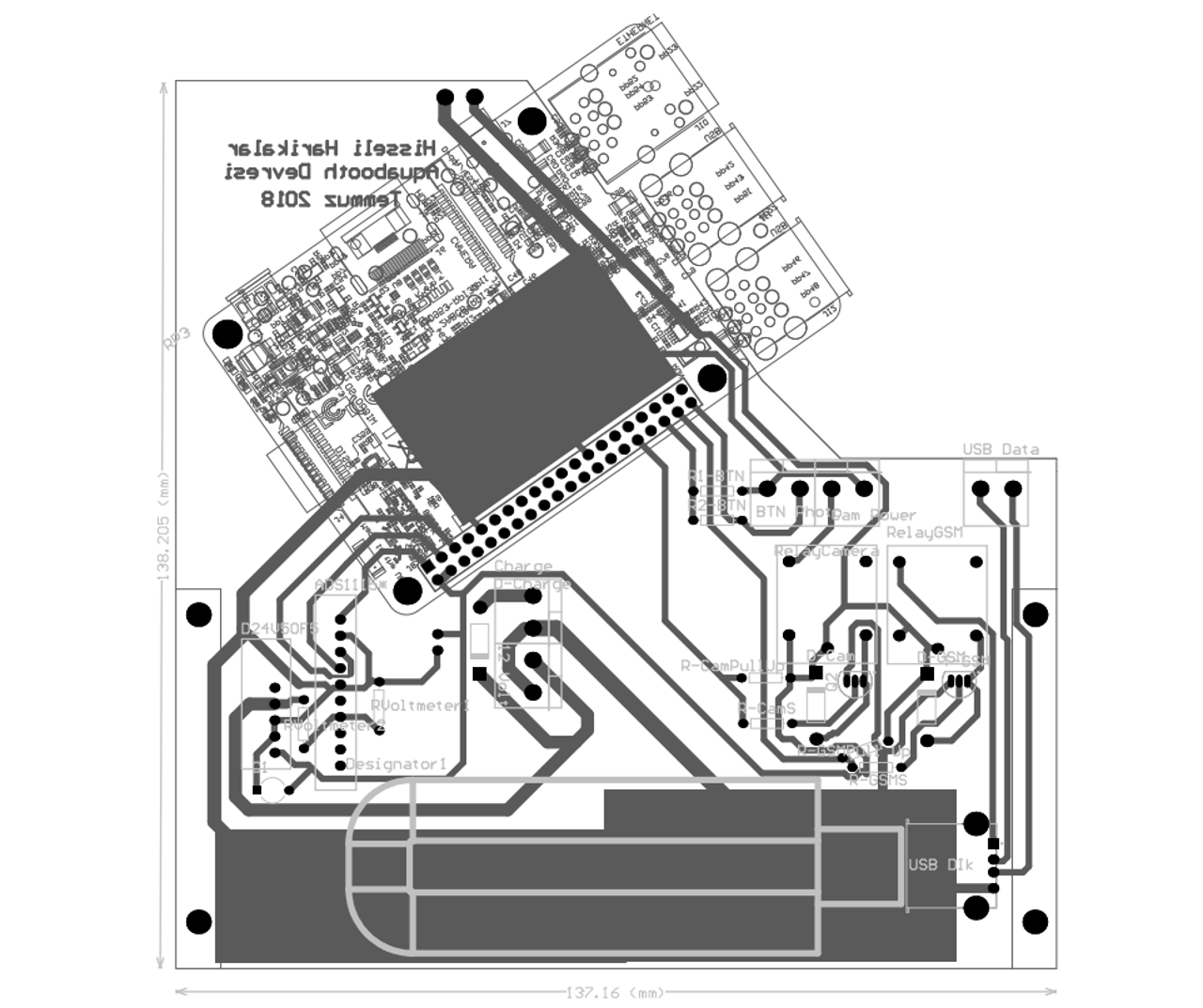 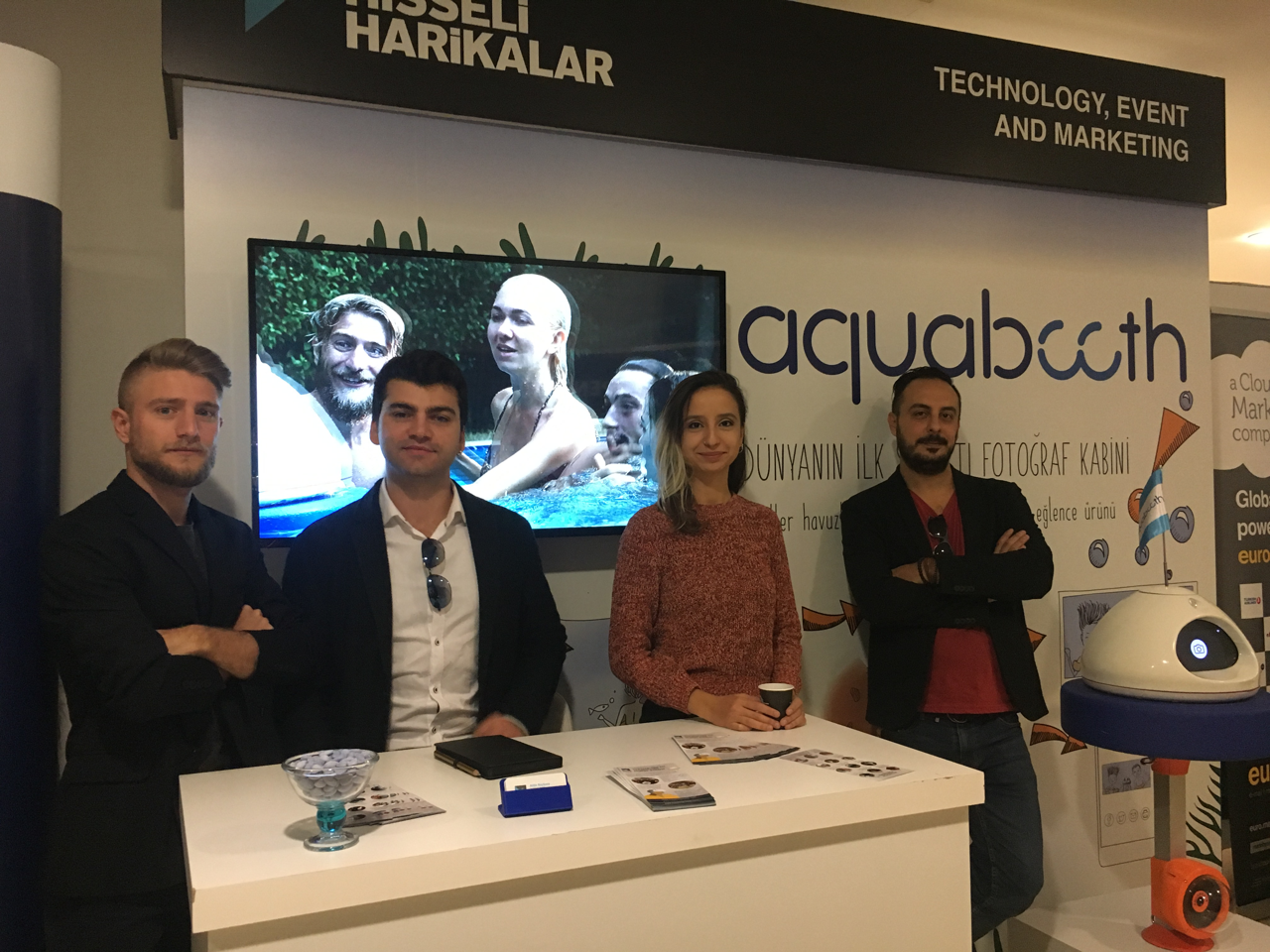 The Sensual Wonders team created the world's first underwater photography robot, Aquabooth. The team consisting of Atilla Baybara, Volkan Ekşi, Şaban Ilmaz, and Utku Olcar said, 'There is no similar or rival in the world yet. We think Aquabooth will create its own market."

Atilla Baybara, Volkan Ekşi, Şaban Ilmaz, and Utku Olcar have been producing and developing technology for advertising agencies and their direct customers since 2006 under the name Hisseli Harikalar. They summarize their work as designing experiences that people can tell each other in activity areas. For the last 10 years, they have designed experiences and technology-oriented products in different places for the customers of many brands. There are also very entertaining products among them. Among them are the products that attract people's attention to the beaches for their customers in the summer months. At the end of this process, they also implemented the world's first underwater robot, Aquabooth. The Shared Wonders team explains how the project came to life and its goals. 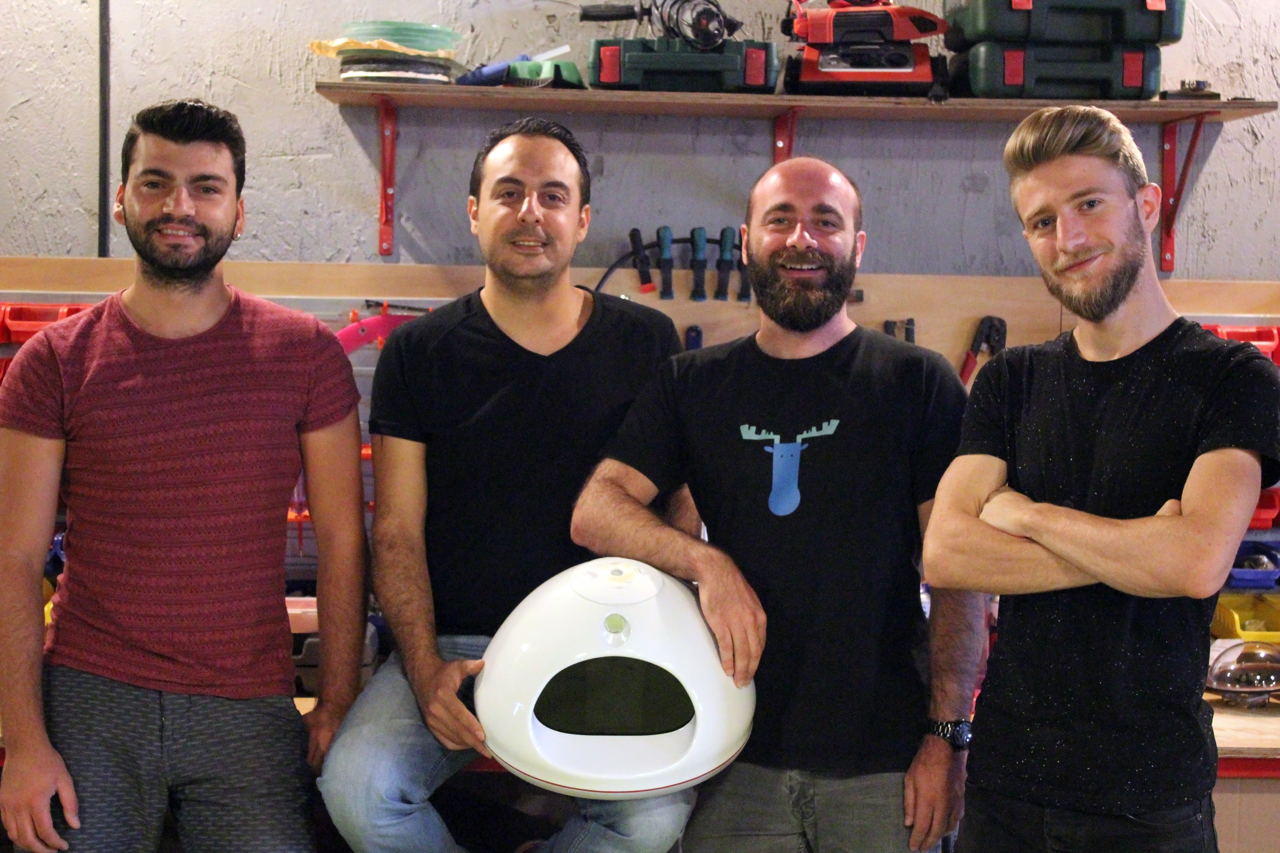 First In The World

People spend most of their time in the water at any beach. We decided to design a product for them to enjoy here too. We designed Aquabooth, the world's first underwater photography robot, with the goal of a fun product, with the simplicity of a sea ball at sea or in the pool, and patented it in 2015. Aquabooth can be easily getting fixed in the water and ready to use after a simple installation. Aquabooth is activated when the user touches the button on the module. Through the screen on it, it shows guiding animations about how the user should pose underwater. The user following the directions poses by diving into the water. The user, who can instantly see the photo taken on the screen, can repeat this process as many times as he wishes.

Reason To Come To The Beach!

While users are having fun with the Aquabooth in the water, the photos are synced to the Aquabooth application. All synchronized photos can be sent to the Wi-Fi printer via the application and printed out. It can be sent by e-mail and shared on social media via Facebook and Twitter. During our two-month trial on one of Çeşme's largest beaches in 2015, guests took an average of 900 photos a day with Aquabooth. More importantly, after two weeks of use, the surveys we conducted among beach guests revealed that Aquabooth would be a reason to come to this beach.

When the idea of ​​Aquabooth first came to mind, we thought of it as an event product rather than an end-user product. After many different prototypes, a successful product in terms of electronics and software, but difficult to install and use, emerged. With the experiences we have gained through the last process, we have experienced what a product that is easy to install and use and can be continuously improved. In all pool, our product will be produced worldwide with valuable support from Turkey we do not doubt the widespread and will be an indispensable product like a beach ball or the sea bed. Aquabooth has no similar or competitor in the world market yet. We developed this product in Turkey, we think will create its own market worldwide. We want to start exporting our product, which we have currently developed the latest prototype, to the whole world by obtaining export and quality certificates with your support.