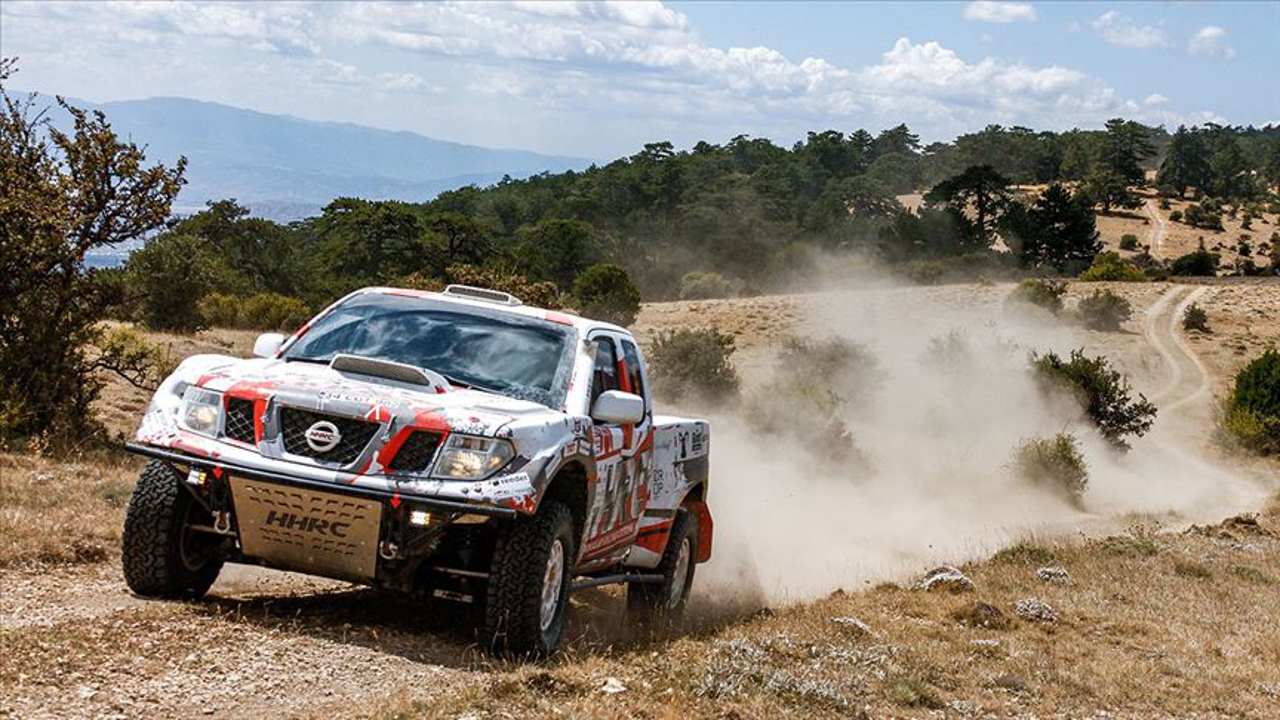 HHRC (Hisseli Harikalar Racing Customs) was founded by Atilla Baybara, the founder of my company which is Hisseli Harikalar and it is an organization established to produce developed parts and racing vehicle projects with a focus on ‘Baja rally and off-road vehicles’. Atilla Baybara joined this organization which is Transanatolia 2019 in raid categories and after that race, he planned to enter this industry and started his first works with me.

First of all, we chose the Transanatolia 2020 race as a goal. Preparing a racing car for this race was our priority to gain experience in both vehicles and production by producing the parts required for the development. In this way, as a team that participated in a race, gained experience, and made a name; we could know our target audience, get involved in this network, and we could also have the chance to detect our target audience's deficiency.

As its name suggests, TransAnatolia is a world-renowned Baja Rally organization that is organized in Anatolia. This year, the 10th race was held in a period when it was very difficult for foreign competitors to come under pandemic conditions. It is a long-termed rally. During the 7-day rally, an average of 400 km lap was run every day. This year, the competitors run 1850 km in total.

They define themselves as follows:

“In a relatively short time, TransAnatolia started to be known as one of the best rally raid races in the world. The first race was organized with great success in 2010. TransAnatolia, which international recognition is increasing day by day, enables amateurs to improve their skills while meeting the expectations of top athletes who want to prepare for long races with the high standards it offers.

While trying to decide the choice of vehicle, we watched many racing videos and promotional videos of the produced vehicles. We examined the vehicles produced for desert racing in the USA, and the vehicles used in Baja type races such as the Dakar rally. We found out that quite a lot of pickup type vehicles are used here. When we think of as commercial, that the market share in Turkey pickup type vehicle in favor of the change, more importantly, we observed that the owners of the pickup vehicles are very suitable to modify their vehicles in this case.

We also became interested in a class called ‘Prerunner’ in the USA. They are mostly pickup vehicles and fit our style too. It is a very costly process to build a race car for a Baja rally like Dakar, it would be very challenging for us to do the same of these vehicles. But, before the race, ‘Prerunner’ vehicles, used by the same teams to see the track, looked like the vehicles we were aiming for. We have seen that many garages in the USA produce very nice pickups under the name of Prerunner. When we look at the visuality, we were convinced that the pickup vehicles look more balanced and beautiful visually.

We have determined our priorities. Firstly, we decided that we wanted a Long-Travel vehicle to be able to go fast in the race in rough conditions and also to jump from high places. While researching the methods of this, the Nissan Frontier came to the fore for us in the examples made in the USA. Particularly, the Nissan Frontier King Cab model is highly preferred for Prerunner construction. Due to the short cab at the back, there is enough place left to use large suspensions. The inside of the cab stays more sterile and there is no need for the cutting process.

On my trip to Qatar, I had the opportunity to examine larger American Monsters at the famous offroad workshop ‘Offroad Store’ of Doha city. 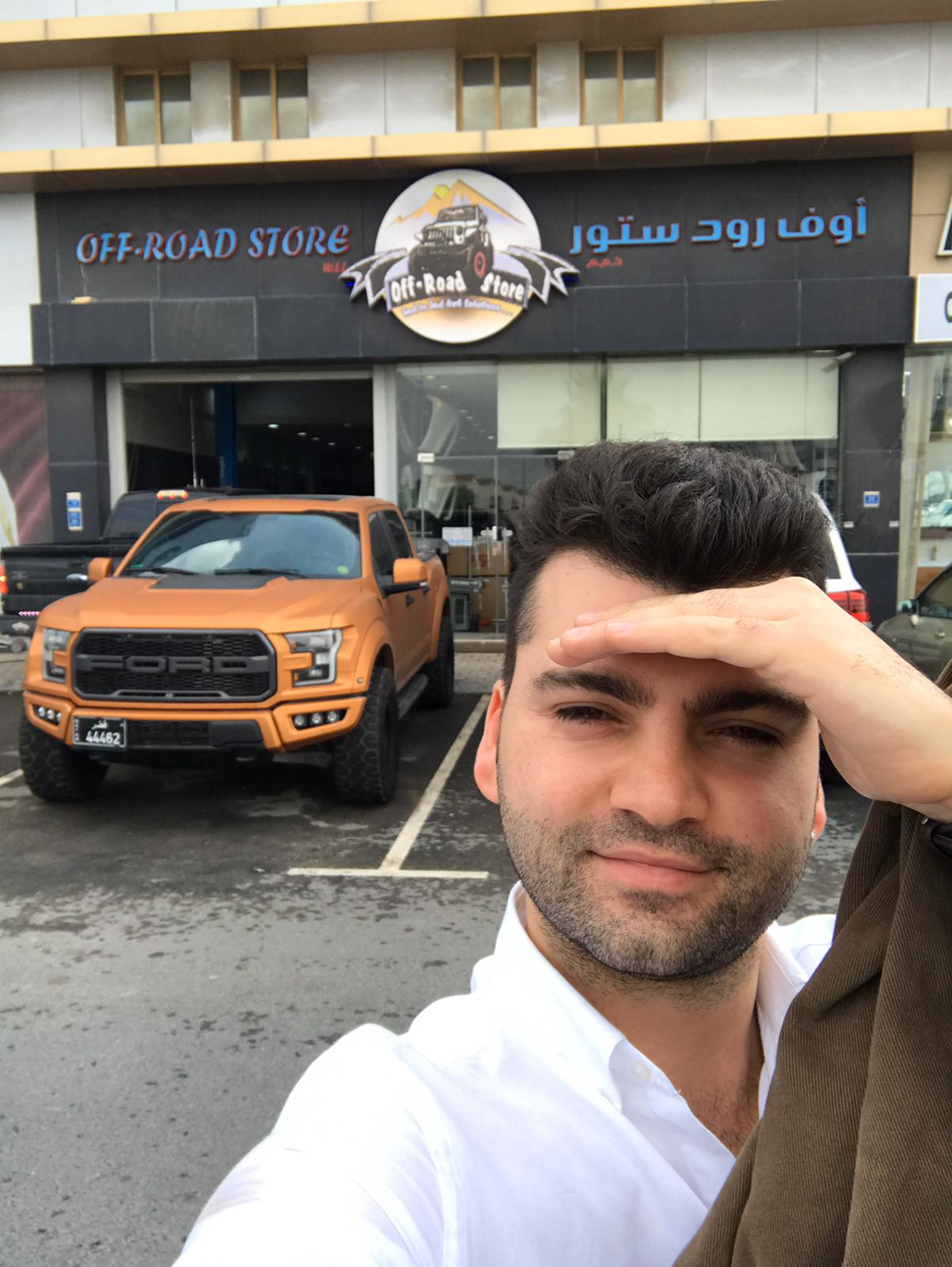 When long-travel is applied in Prerunner vehicles, the most striking detail part in the exterior of the vehicle is the fenders. Tires can go up more when a long-travel is applied and, at the same time, the original fenders hit the tires as the tire diameters were replaced with larger ones. It was decided to use new fenders to prevent this and also, make the body of the vehicle bigger.

Front and rear bumpers are almost imperative to change in this kind of race. The original bumpers both limit the approach and departure angles, and because they are plastic, they break apart rather than protect the vehicle in any minor impact. The use of metal bumpers in such vehicles prevents different parts of the vehicle from being damaged in a sudden hard impact. For instance, any damage to the radiator in a frontal impact can cause the vehicle to be directly out of the race. To prevent this, bumpers were designed as light as possible, but protecting the vehicle, keeping the approach and departure angles at maximum. These tampons were examined by the samples abroad and were drawn and produced by me.

The side step were designed to prevent damage to the cab in case of side damage to the vehicle and were kept as simple as possible. An iron cage called a bed cage in the back was designed by me. The purpose of this cage is to connect 16-inch bypass shocks, which are auxiliary systems to our scissors that allow us to get 19-inch travel at the back. The more robust and stable this structure, which is loaded with a lot of weight, provides a better ride. Also, the spare wheel part we produced in conjunction with the rear bumper was of critical usefulness. 2 spare wheels, 1 jack, and an emergency box, which is also my design and production, was designed. 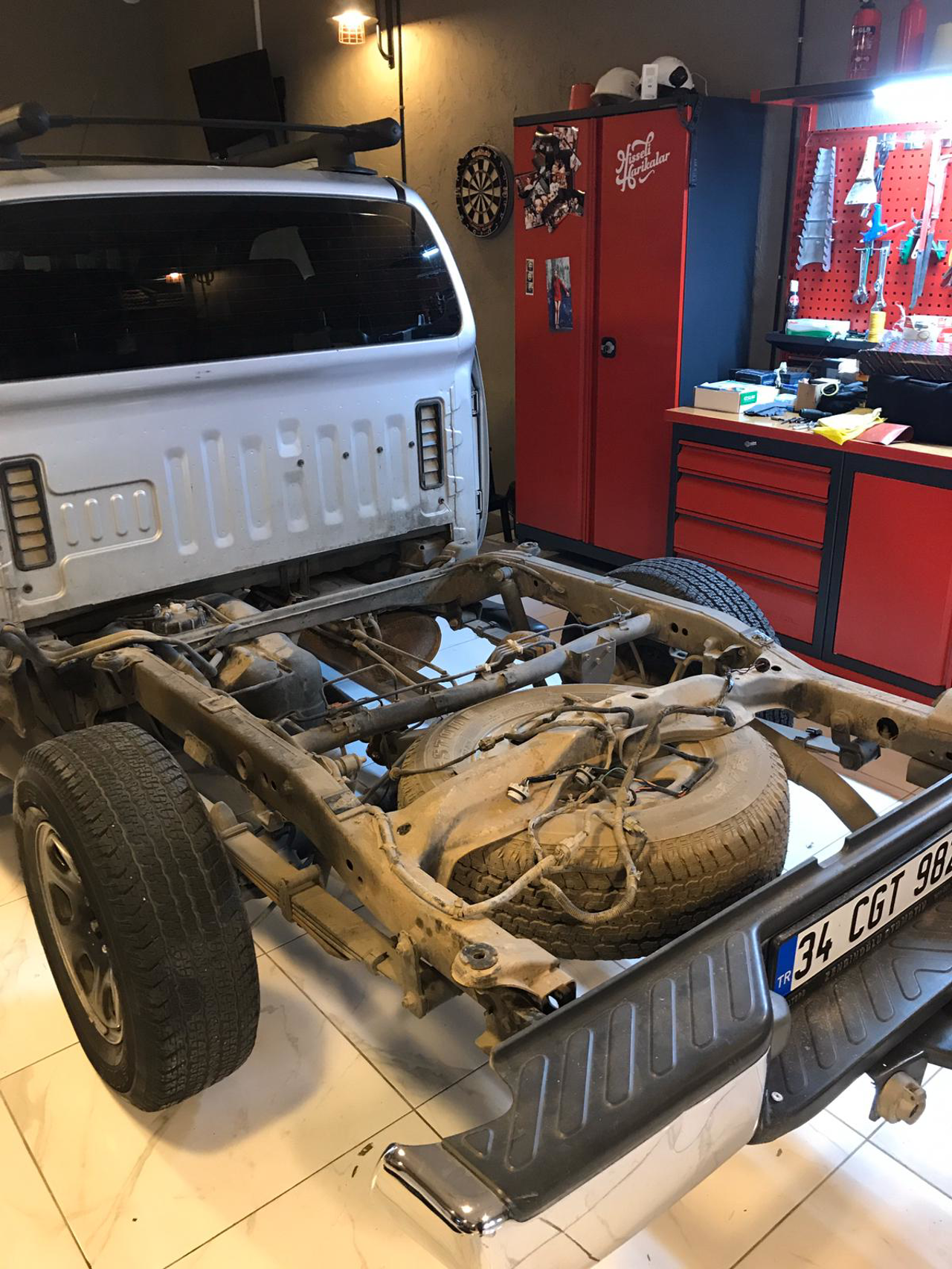 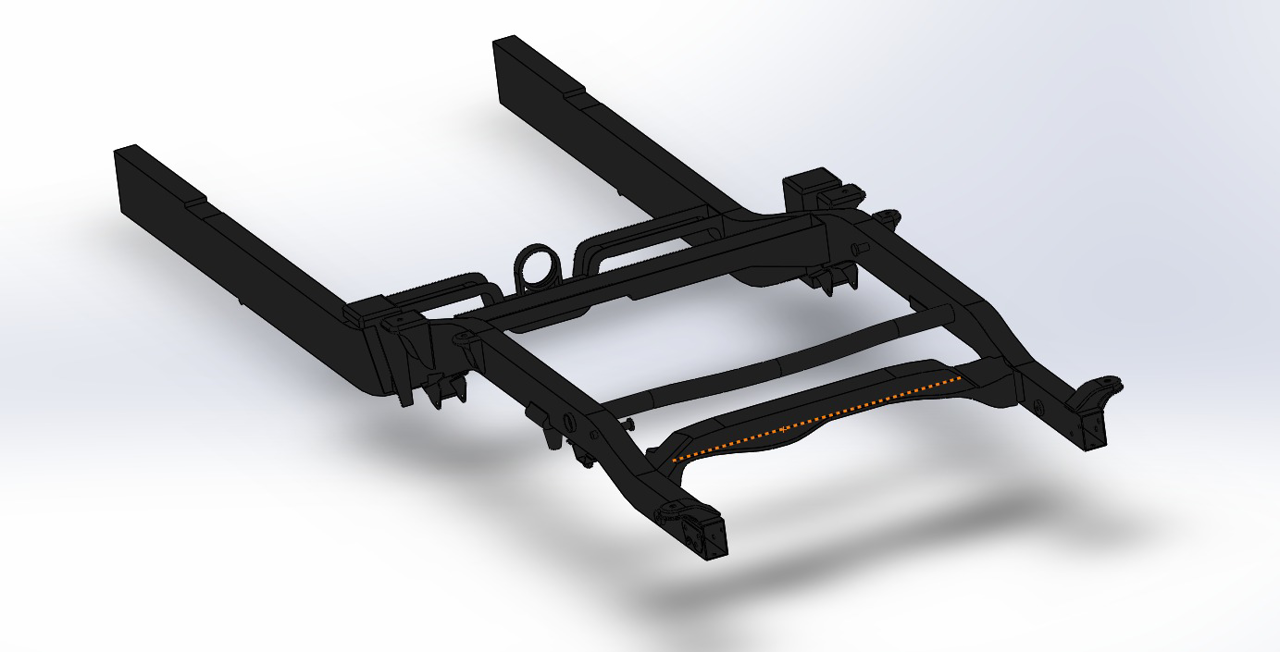 After the technical drawings of the chassis were completed, the critical elements for movement were mounted one by one in the computer environment, and the parts where we can get the maximum travel were drawn. In this way, we created our designs to use the facilities such as vehicles and suspensions and switches at the maximum level.

By producing the first parts we designed in the computer environment, we tested on an empty chassis we purchased except for our vehicle. 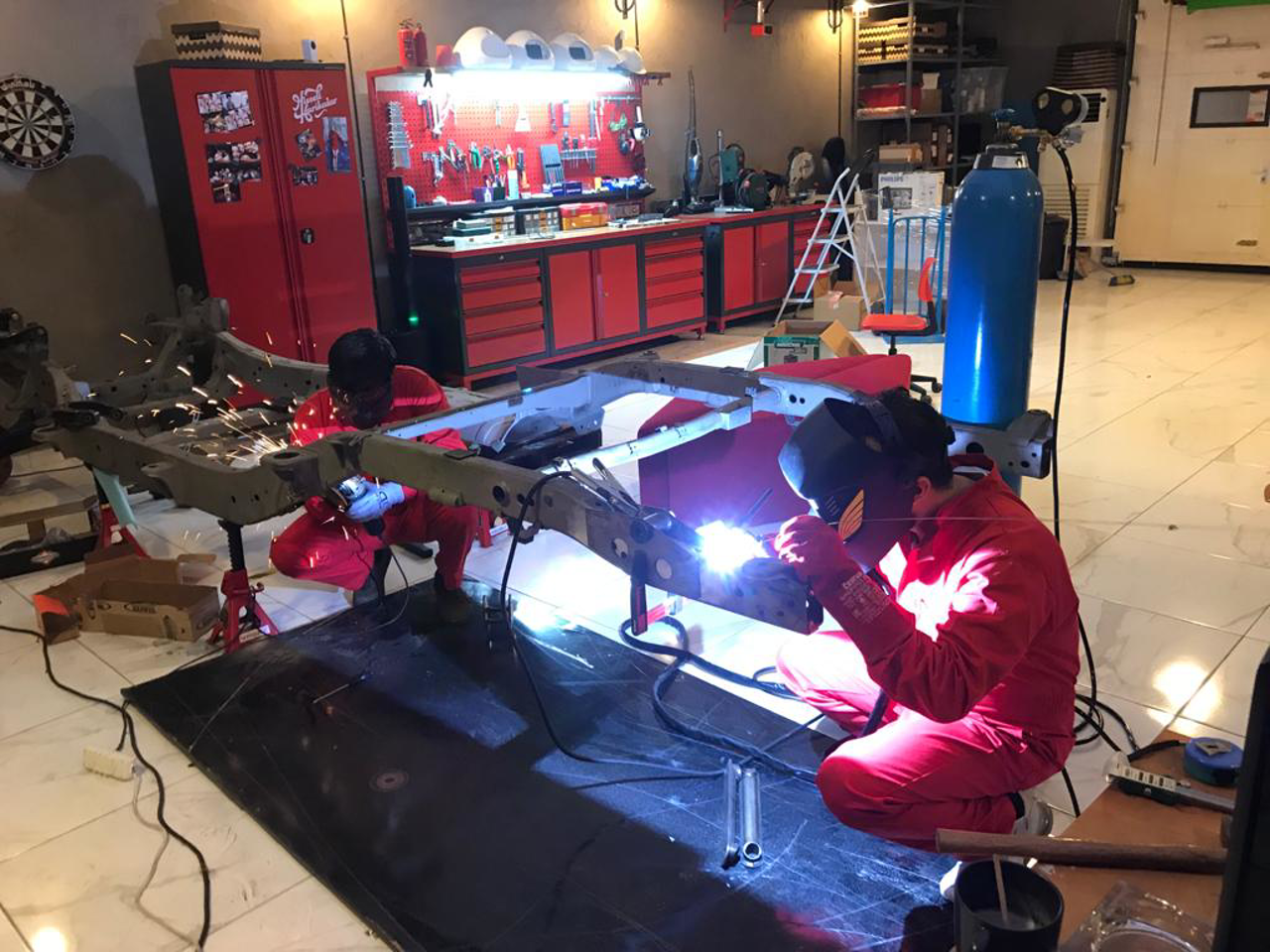 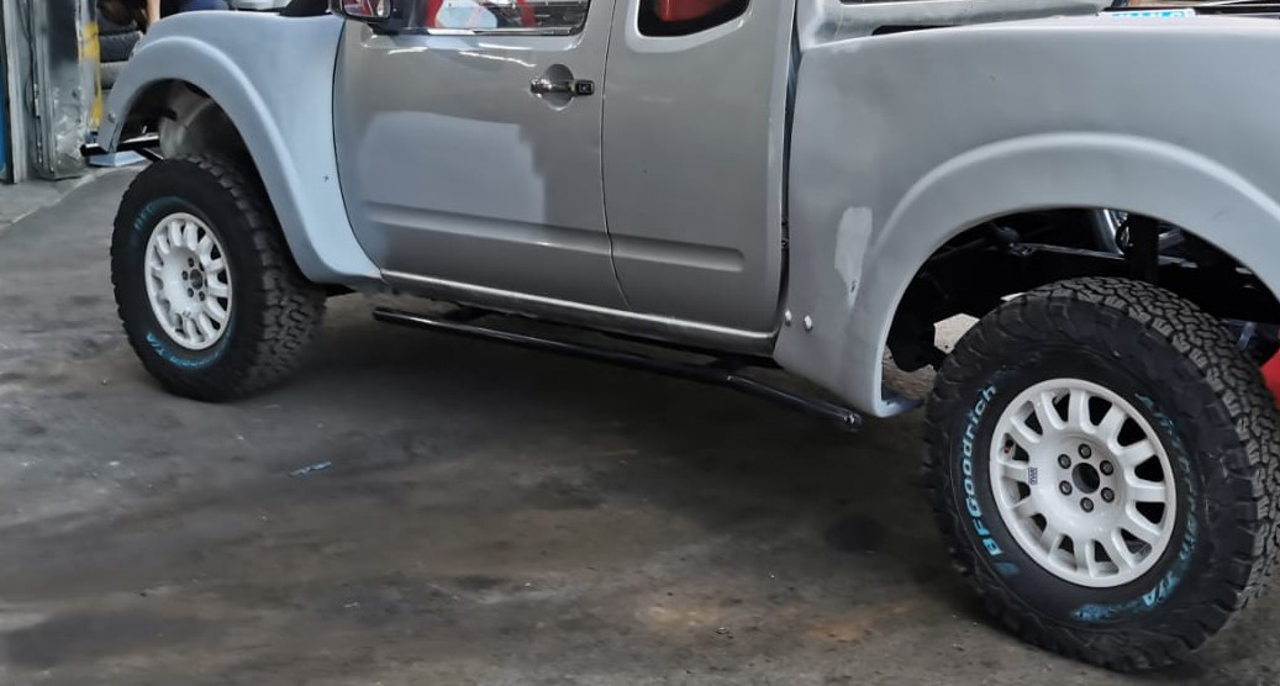 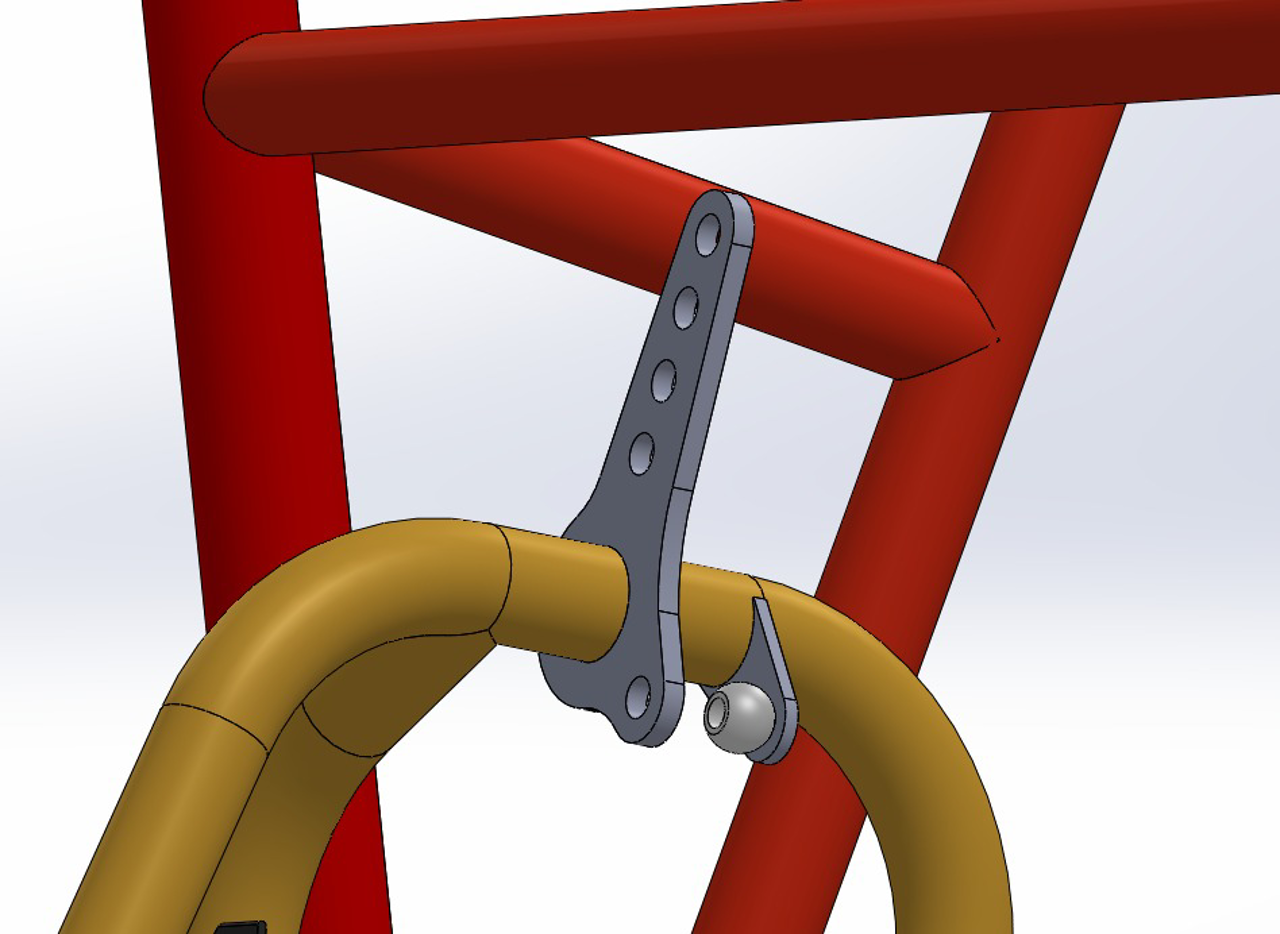 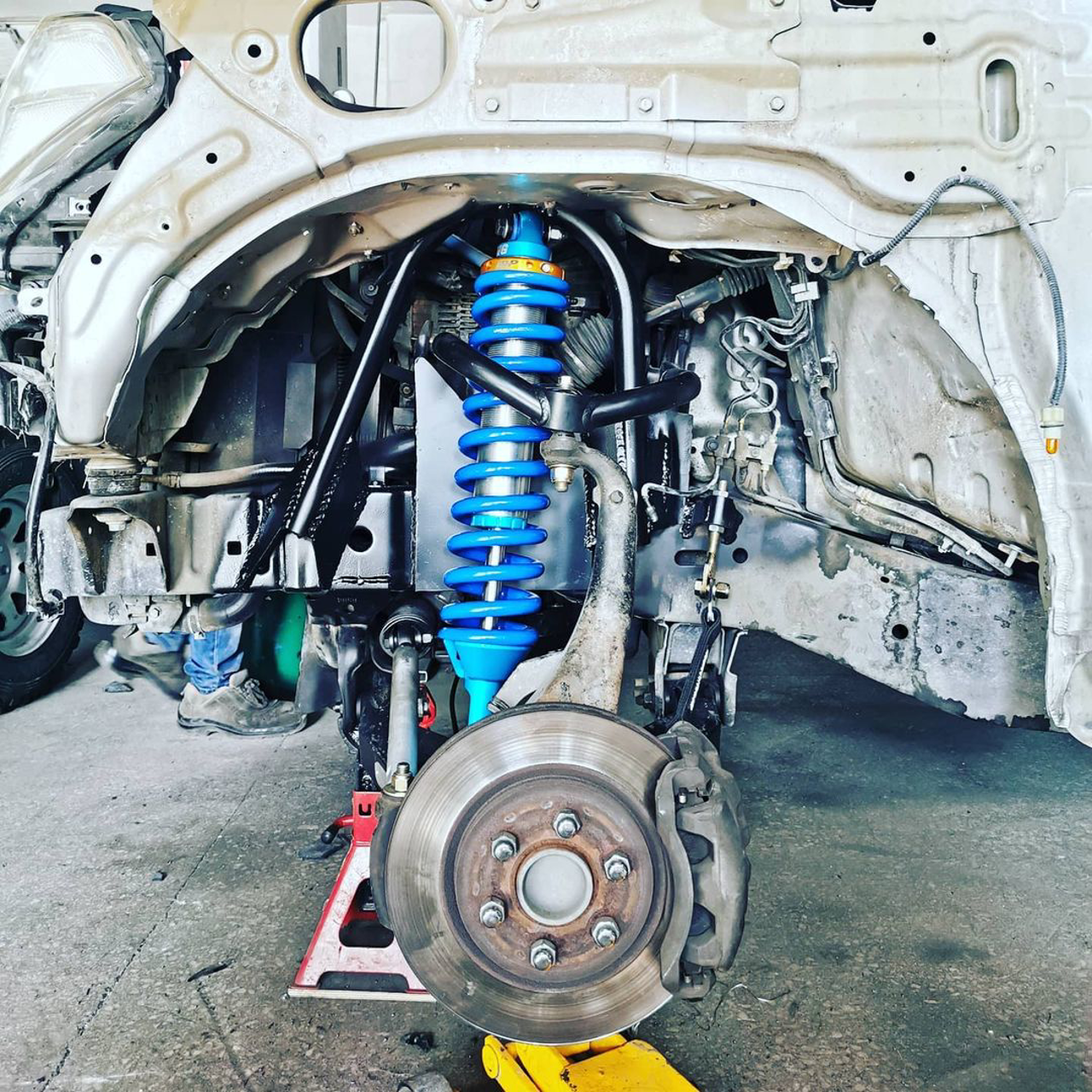 The interior of the vehicle was made by Becce Motorsports.

At the same time, we assembled some of the parts we designed and manufactured within Becce Motorsports. 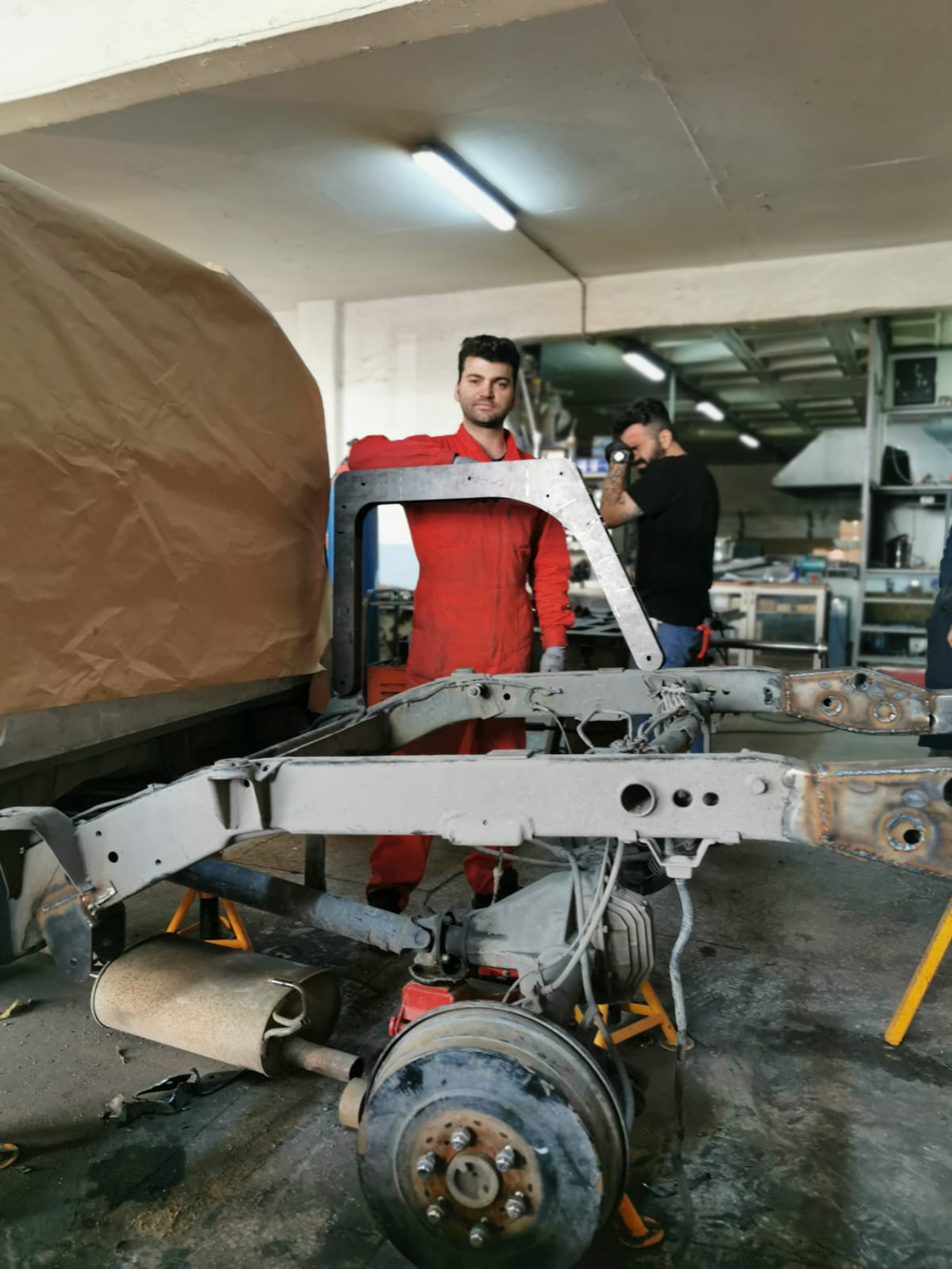 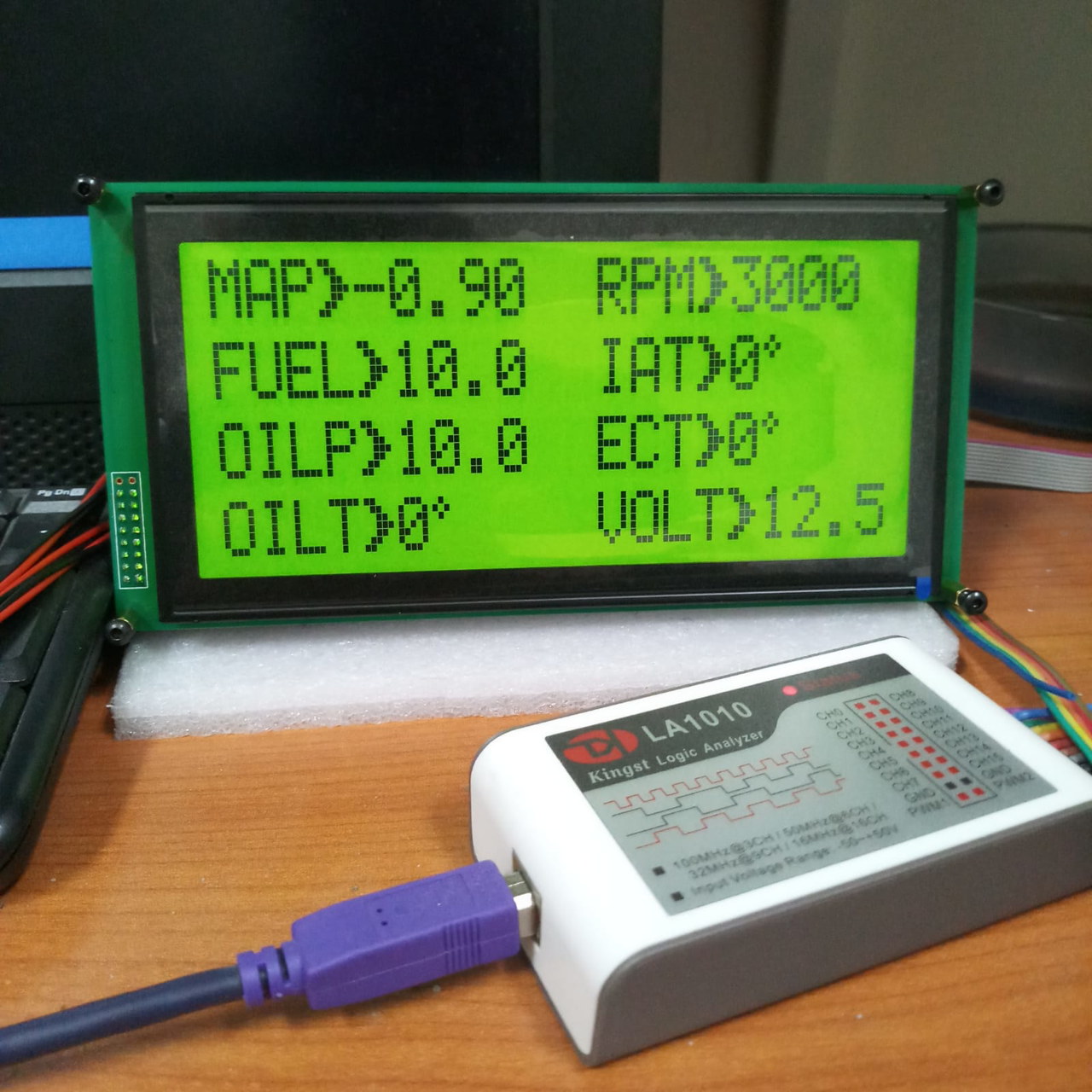 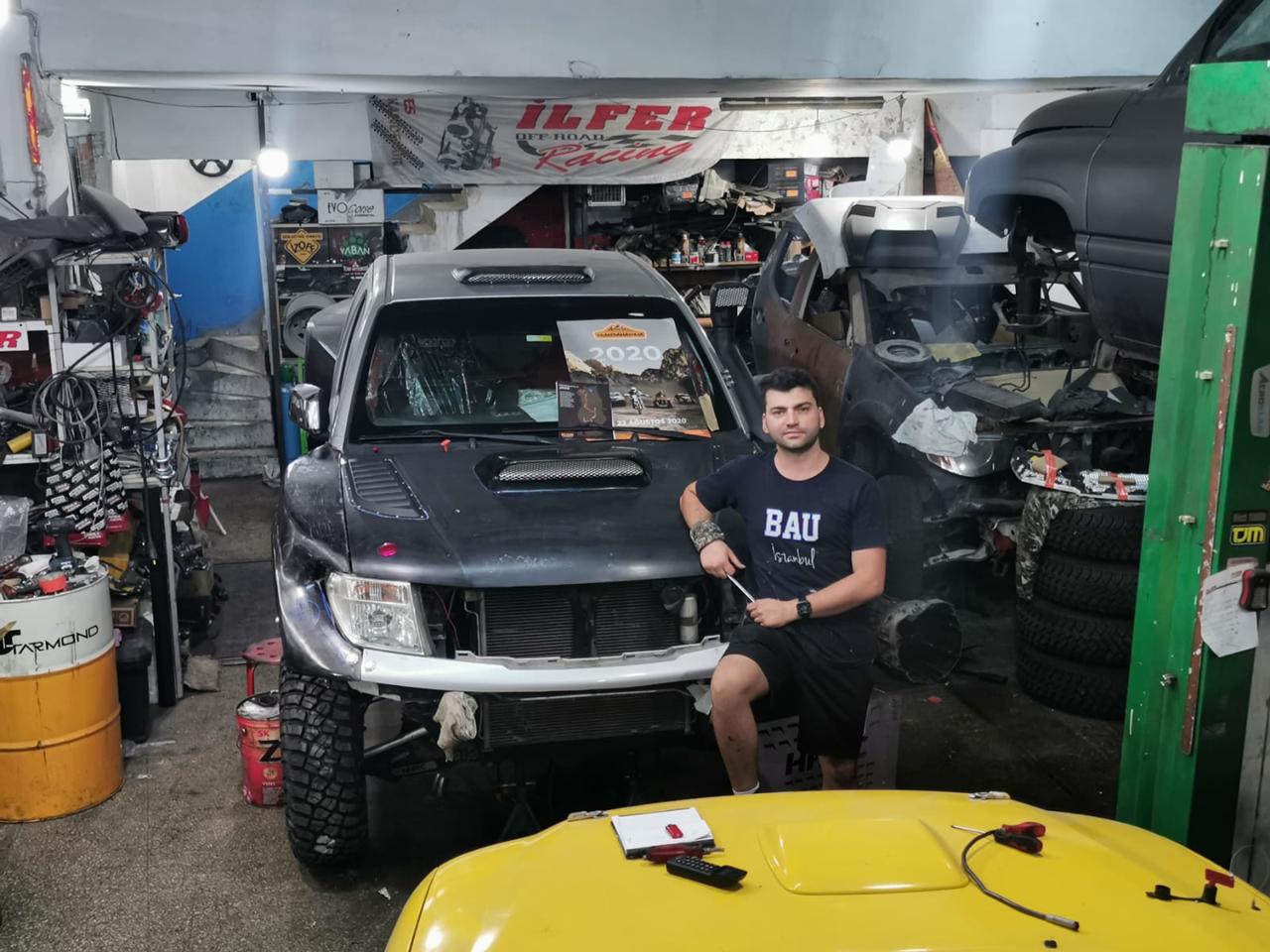 After the car was completed, we completed our first test drive on the forest stage of Intercity, which we all know from the Formula 1 race track. Here, while trying to complete the stage as fast as possible, we followed the engine values by monitoring the sensor data. We measured the suspension responses. Our first impressions were that it was a very comfortable ride even in very deep holes. Deciding that the rear suspension settings need to be adjusted a bit more, and we left.

We reviewed our settings at Becce Motorsports.

Race days are actually a topic in itself, but I will try to cover it simply in this article.

First of all, I was in the co-pilot seat in the race. This race was my first experience in this matter. I learned how to use Stella satellite tracking and communication device, Terratrip Tripmaster GPS distance tracking device during the race. Also, I learned to read the roadbook during the race. I got information from co-pilot Sertaç Tatar about markings to be made for the roadbook and the important details that need to be considered in the days before the race. The night before the race, I completed my preparations in line with the additional information I learned about markings with co-pilot Armağan Altun, with whom we previously worked at the Becce Motorsports workshop.

We had many problems during the race. On day 2, we hit a log on the roadside in the mountains of Bolu and broke our right carrier, reached the rescue within 5 hours, took the backup, and repaired it, and continued on our way. We climbed the highest hills and mountains of Anatolia with our 2 wheel drive vehicle. Although we had 2 wheel drive on the last track, we even fought on the beach in the sand and somehow successfully reached the finish line. 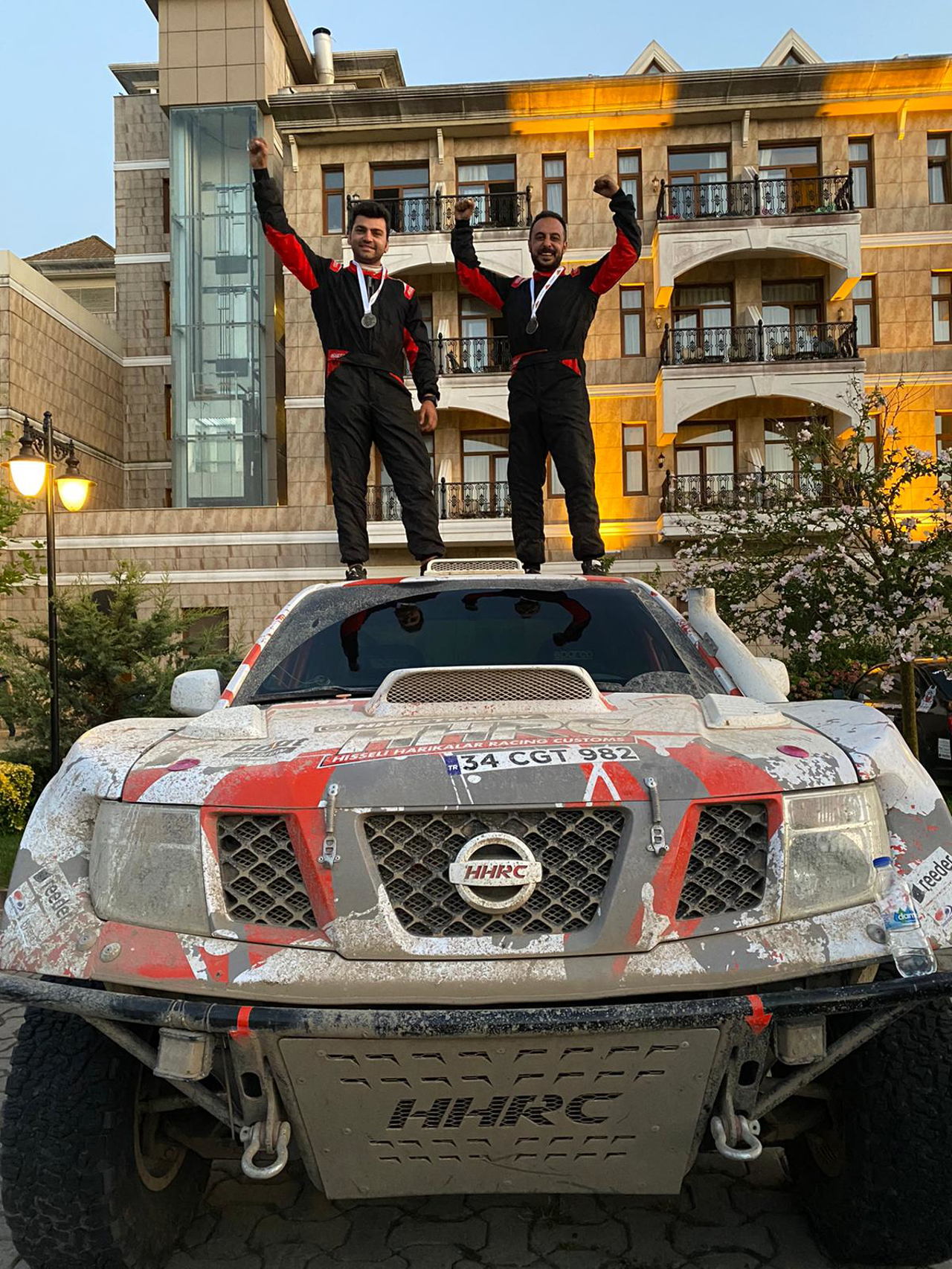 After the race, after determining our rights, mistakes, and deficiencies, we went to our workshop to make improvements. Now, we are planning on how to make our vehicle better and make a better race next year, and we can produce commercially which parts and sell them both to our country and abroad.