How to Make A Teleoperated Robotic Hand

This is an approximately 50 cm lenght robotic hand, designed and produced in only three days in-house. The robot is driven by hand using Leap Motion technology.

Purpose of The Project

This project has reached us from an employer's union to explain to the industrialists that new technologies will be touchless and in the future, employees could work without any danger in any condition with zero industrial accidents.

I had really limited time to finish this project and I should have been chosen the production method wisely and I decided to make it the way I know from old projects. For my older project (Whole Body Teleoperation of Humanoid Robot) I was using and a humanoid robot. This humanoid robot was RQ HUNO humanoid robot and a model under the brand Robobuilder Company.

The RQ Huno humanoid robot contains 16 Sam-3 Smart Servo in it. These smart servos could be driven by serial communication and have its own communication protocol. I already knew this protocol from my older project and also there was a C# library that was already written by me. So decided to use these motors.

My company had the bigger version of the RQ-Huno humanoid robot. This bigger one was called RoboBuilder Creator 5720T (The company stopped selling this robot, so I left a youtube video) 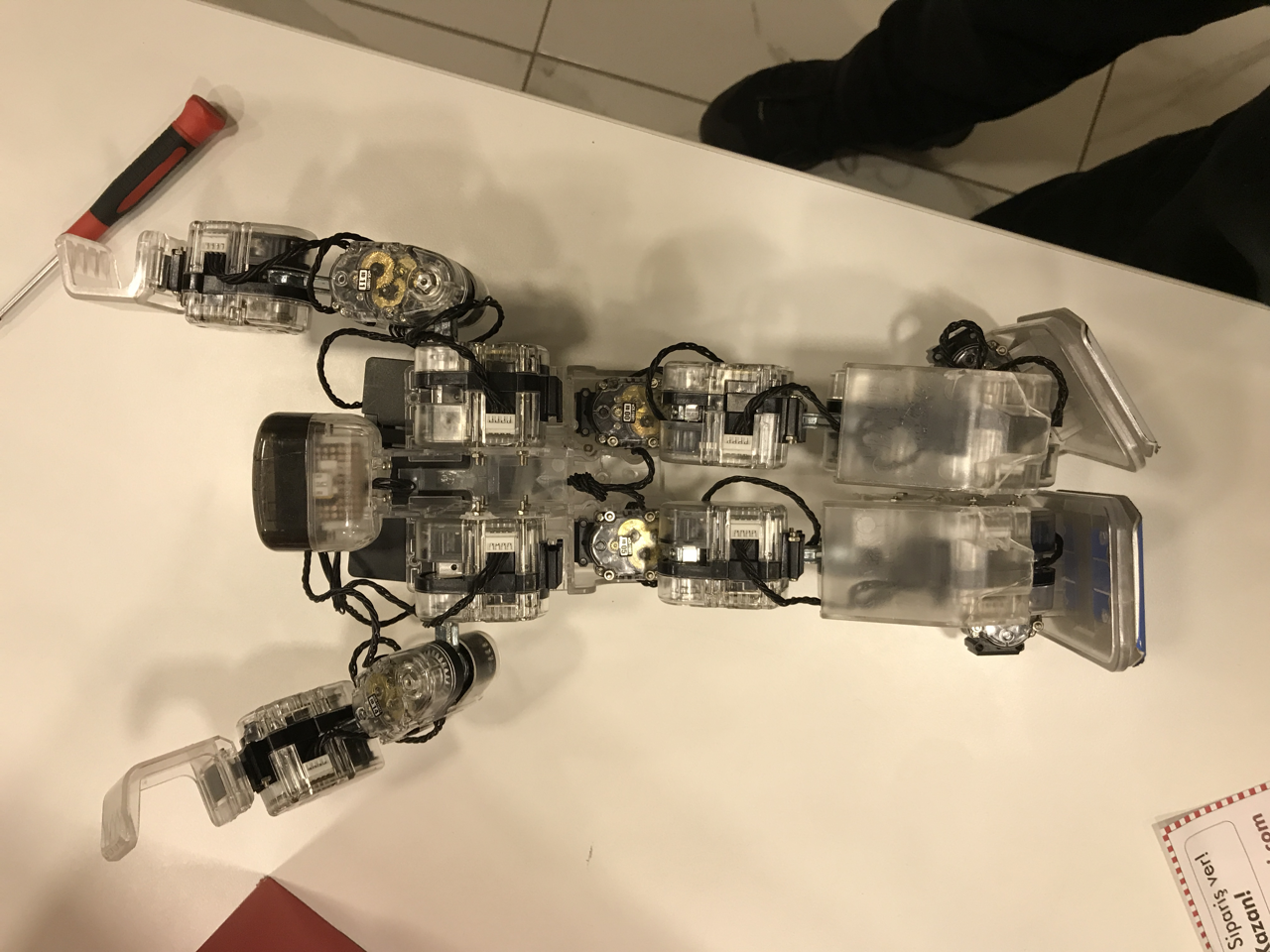 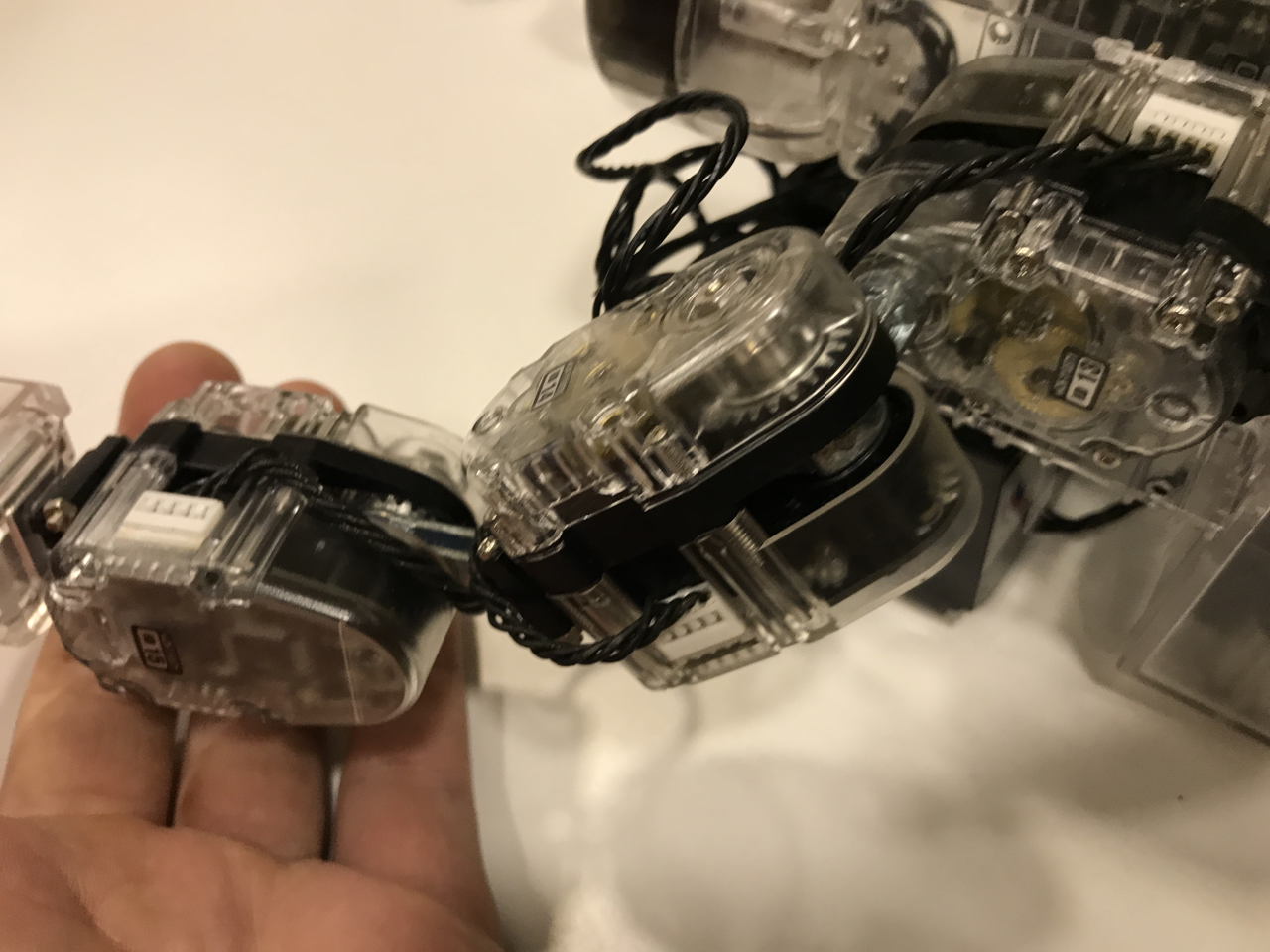 I reassemble the servo motors as fingers with Robobuilder's small metal connector parts. Then, I decided a placement layout. I draw that placement layout into a paper for an easy copy to the 3D drawing. 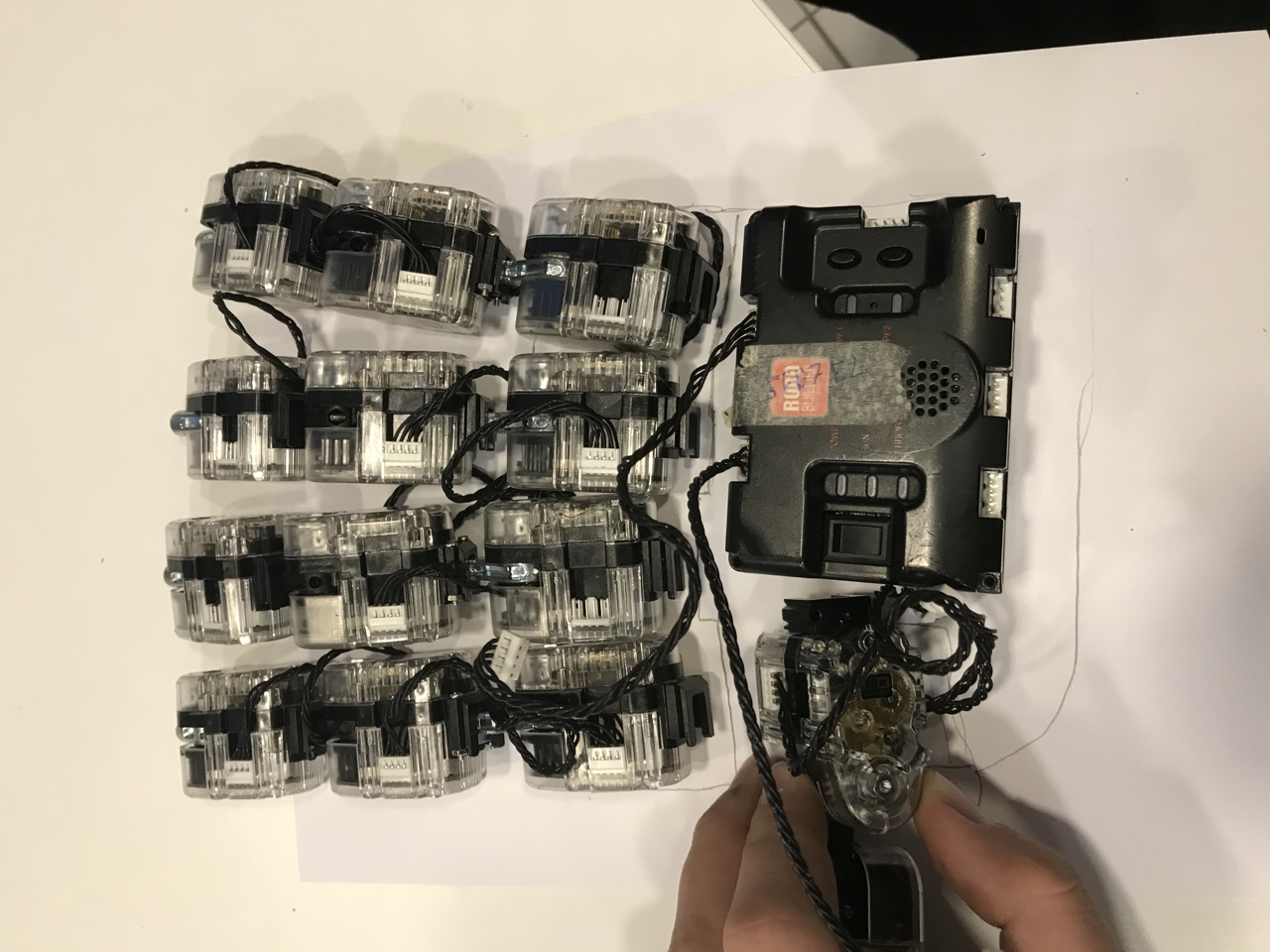 This layout was designed to be the mainframe that carries all the fingers and fix them to the bottom base part. This part produced with a laser cutting method with 5 mm plexiglass material. 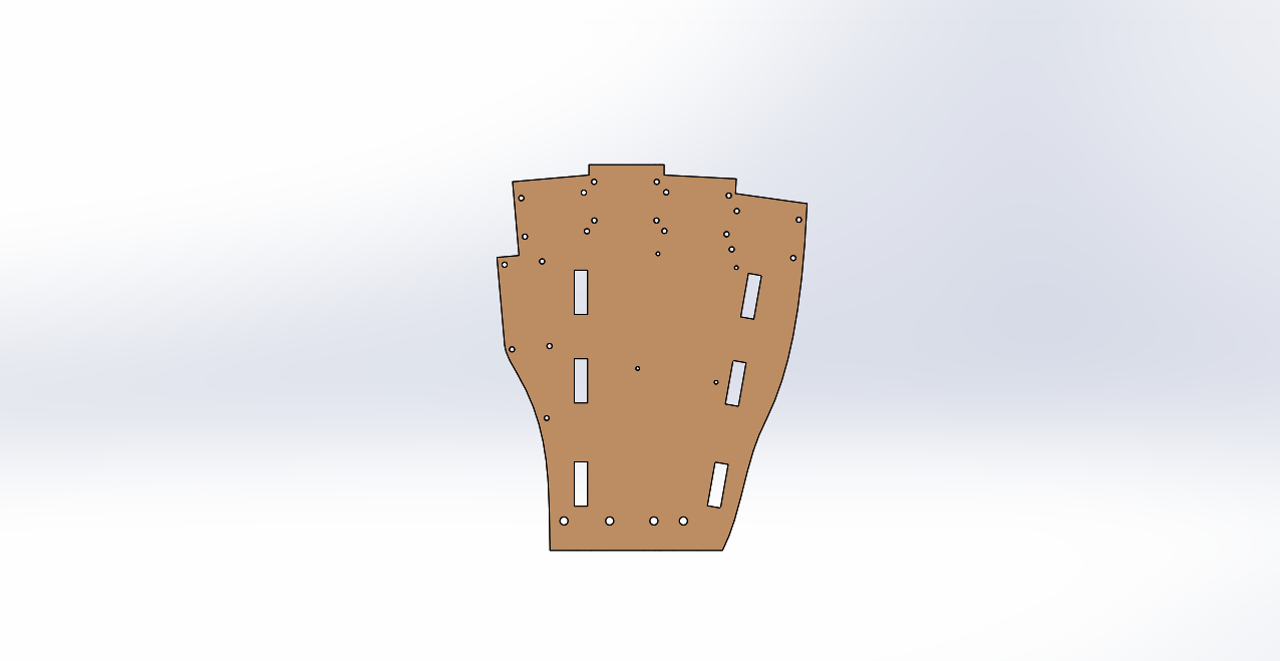 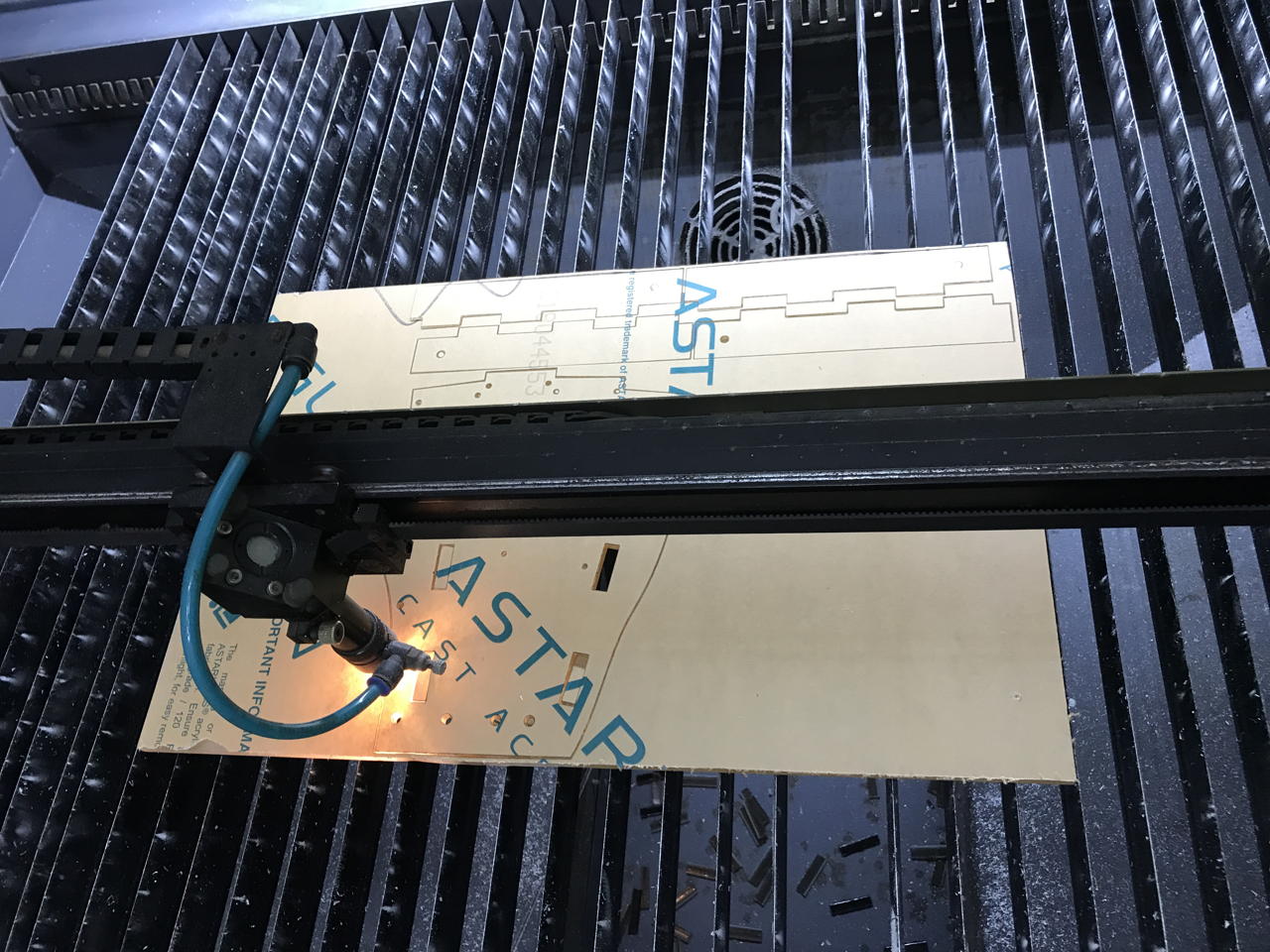 Servo motors' working direction was not suitable to directly pinning to the plexiglass frame. Because of that, I modeled new 3d parts in Solidworks software to stabilize them to the frame and I produced them with a 3D printer. I have designed two different types of holders. One of them was for the thumb finger, the other one for other fingers. 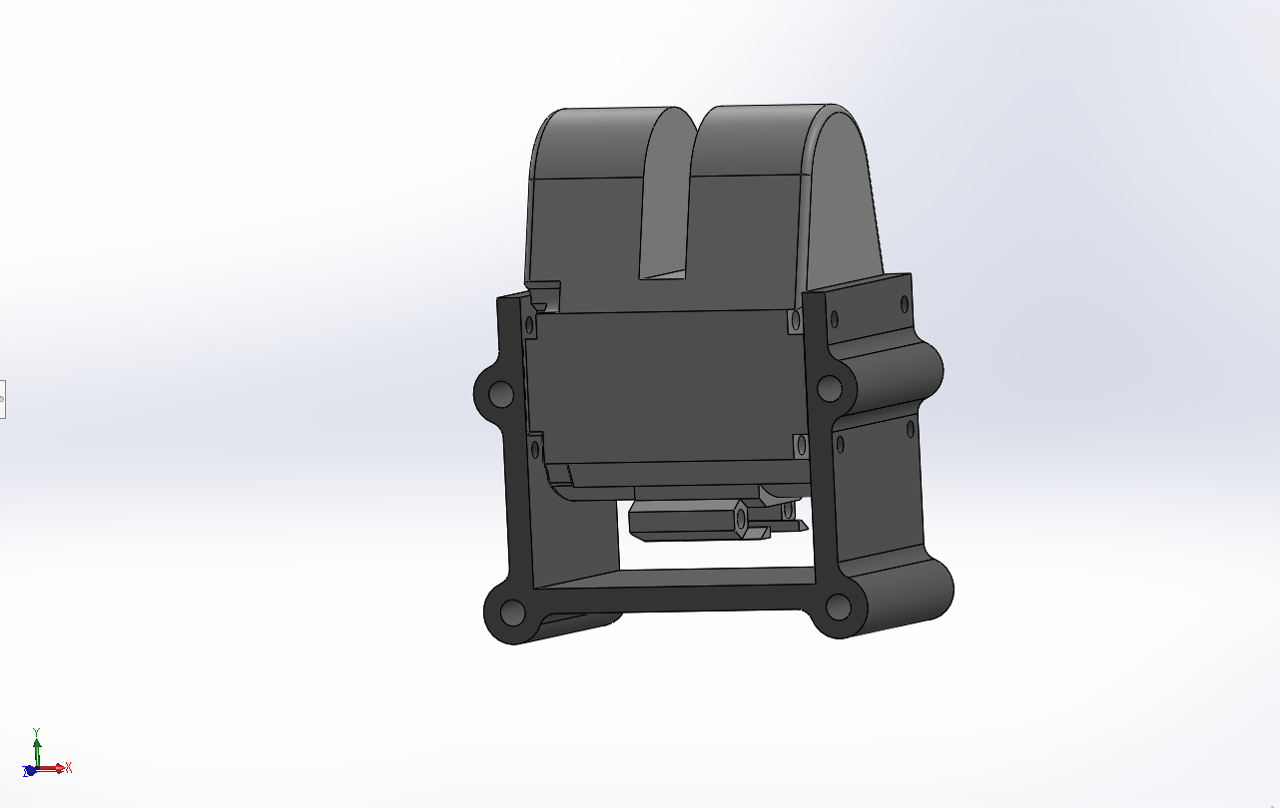 The part design for the thumb finger prepared for two-sided. 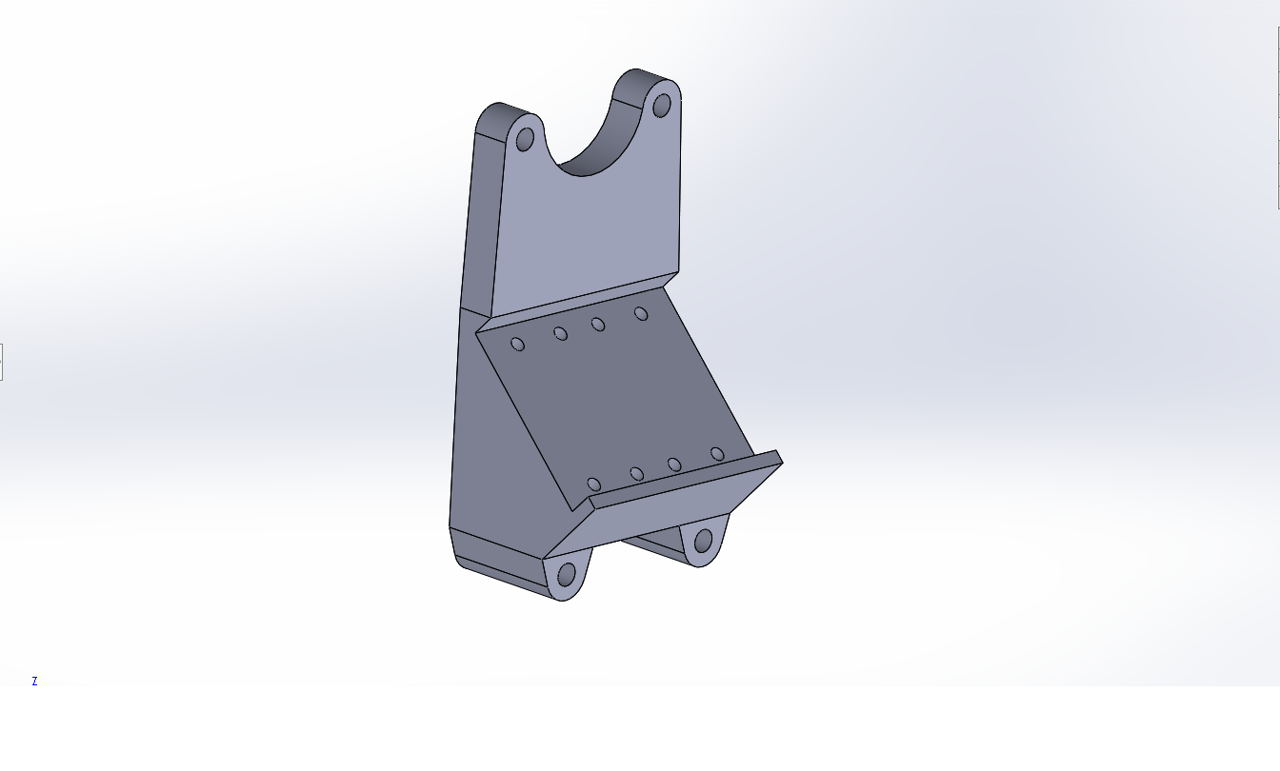 The base is also designed with Solidworks and produced with our 3D Printer. We have an Ultimaker 2 3D Printer in our office and we can easily produce prototypes in-house. This 3D Printer has a 21 cm x 21 cm 3D printing area, so this is our limit to design a part to produce at once with this 3D printer. My first design was bigger than these dimensions, after I tried to print this base I realized that and change the design to make it suitable for our 3D printer machine. 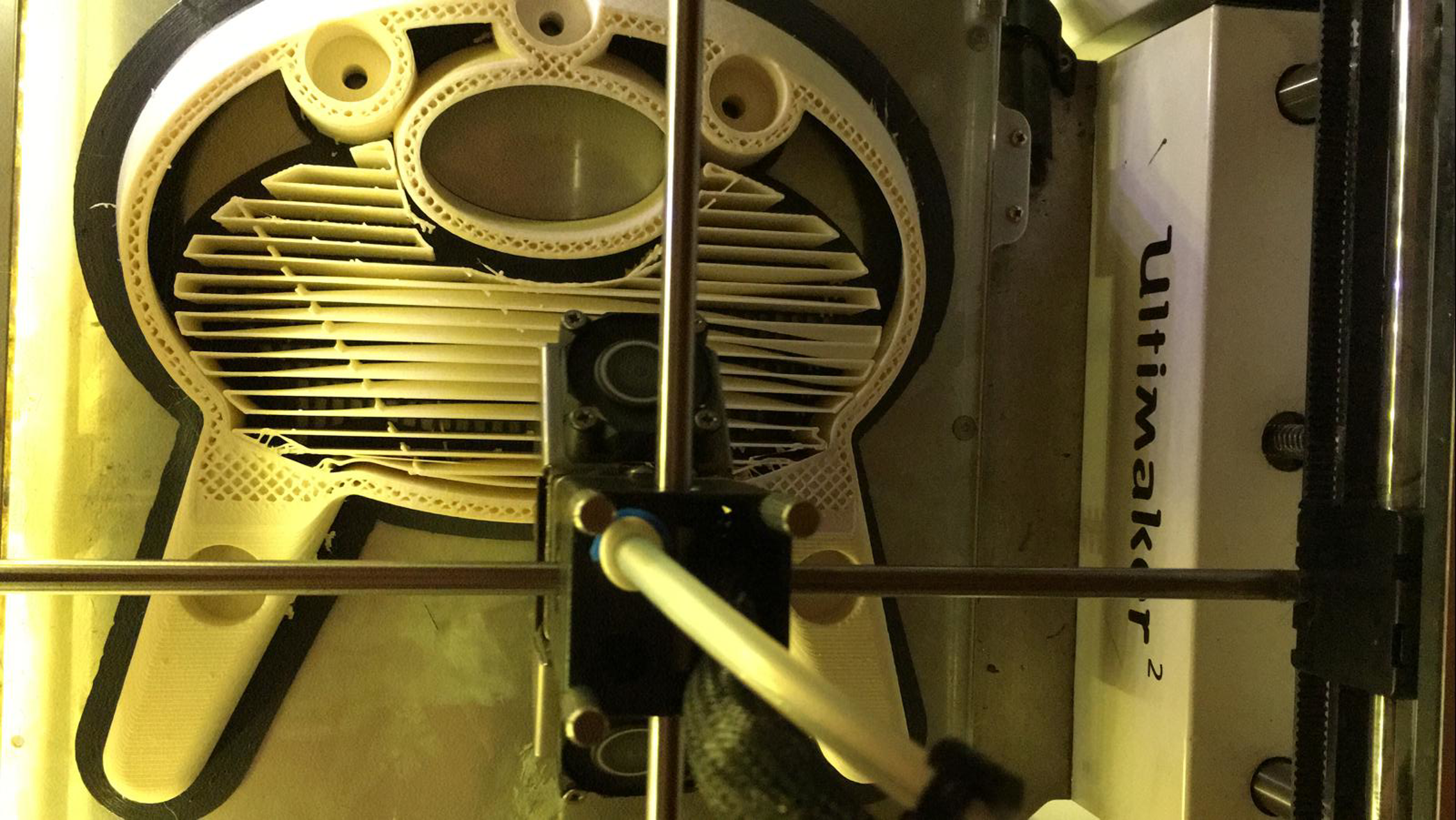 After all this design and production of the elements that we have to use to make our robotic hand working. We needed one more important part to make-up our robot. The cover part was going to make a clear appearance for all massy cable connections and other necessary components inside the robotic hand. I designed that part as the cont of the base model. This part brings really smooth view of our robot design and made all the things clean and more eye-pleasing. 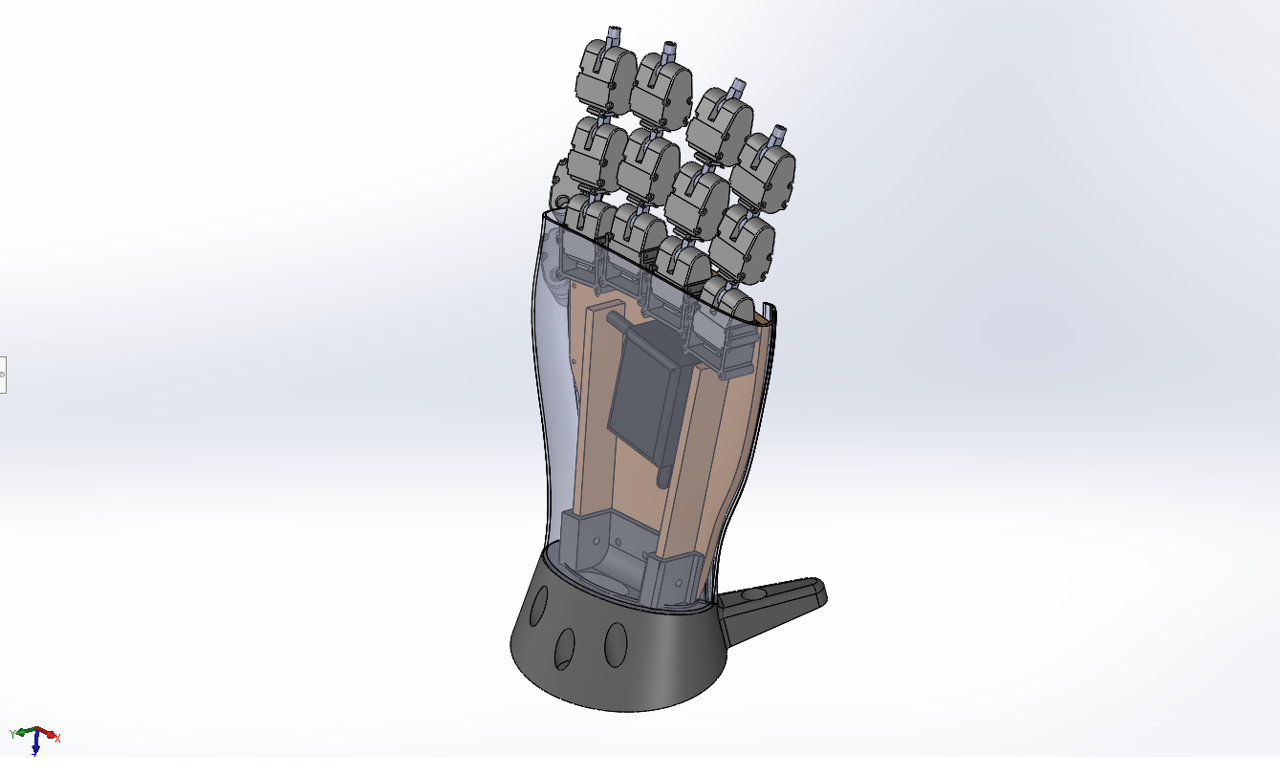 The time was running out but our 3D printer was not able to print all the parts, so we get support from the 3Durak Company which gives the 3D printing service. Only the cover part printed outside our office. They produced that part slicing 3 different bodies with 3 different 3d printer machine. Then, they glue the parts correctly. They produced and gave us this part in one night only. 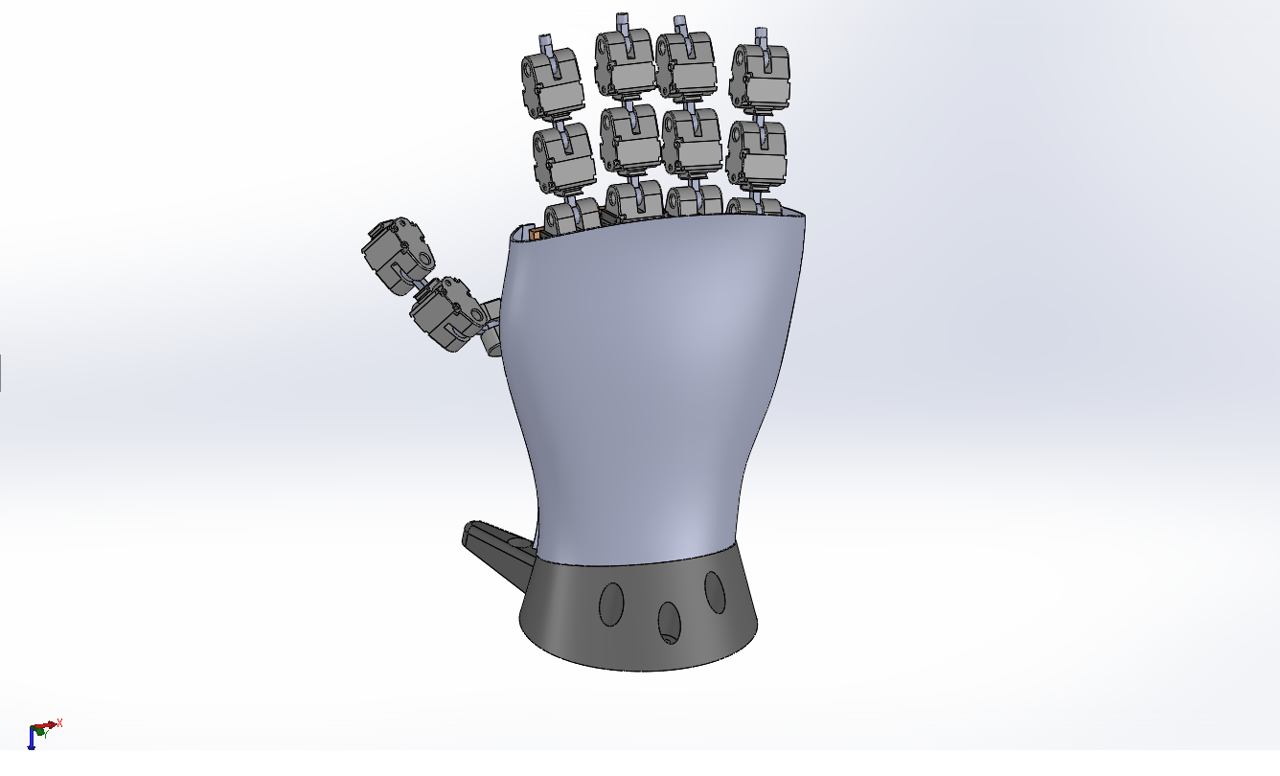 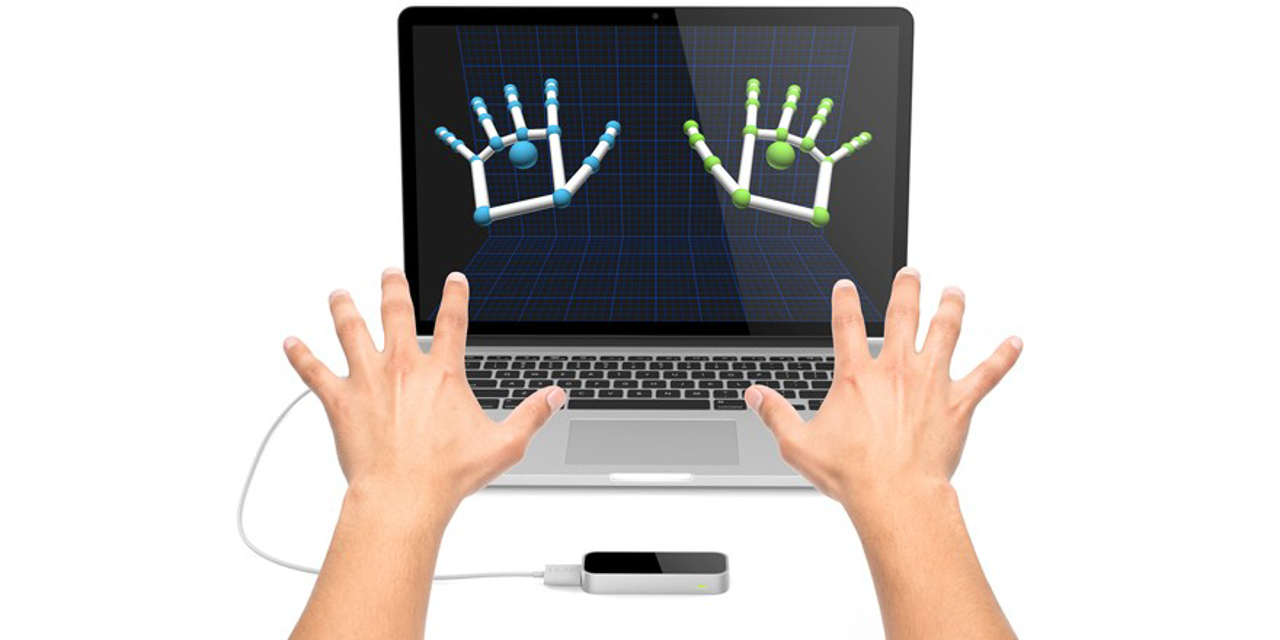 I have found a Unity3D SDK for Leap Motion. Not only the driving robotic hand but also providing a new experience to participants we developed several mini-games with Unity3D like minigolf game etc.

We have taken the finger positions and axis angles of fingers and I used this data to drive out a robotic hand. Using my Sam-3 servo motor C# library, we sent the data to the robotic hand and the project worked like a charm. 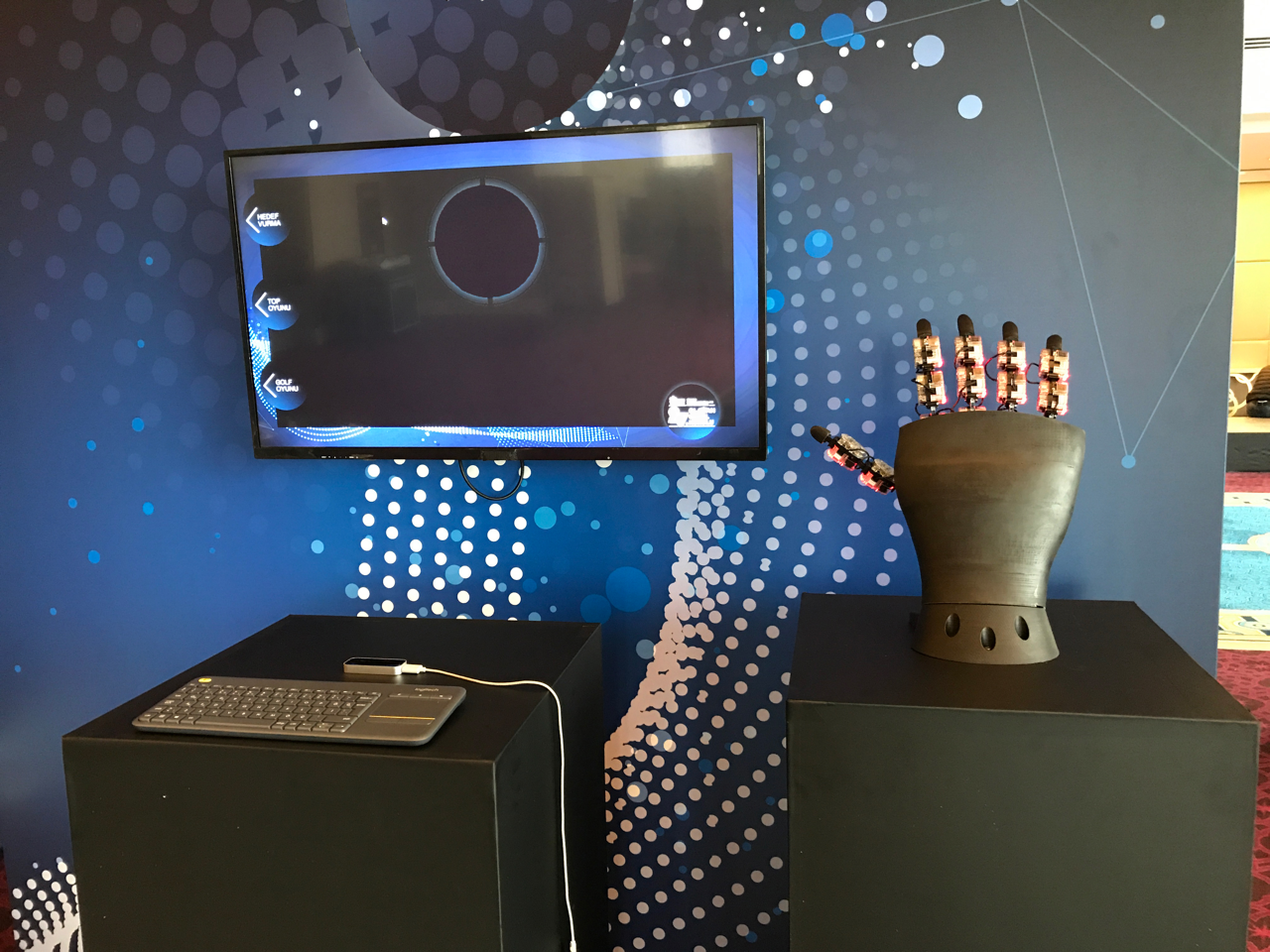 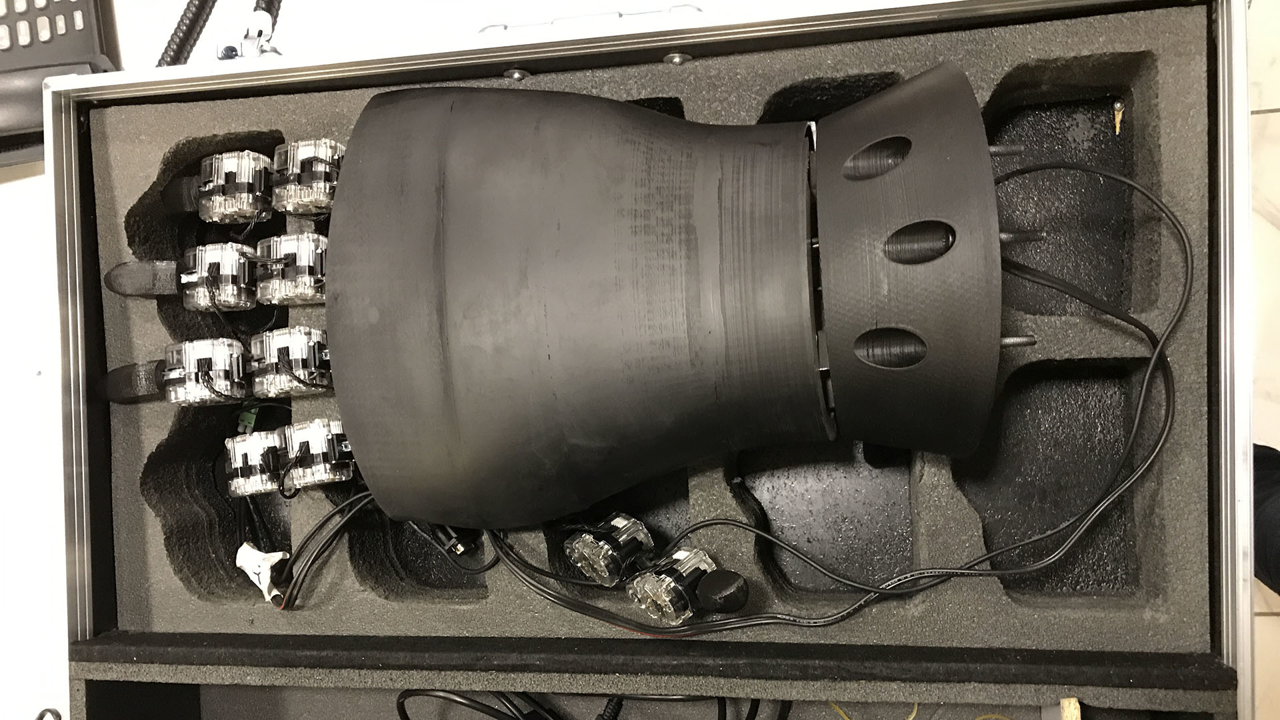